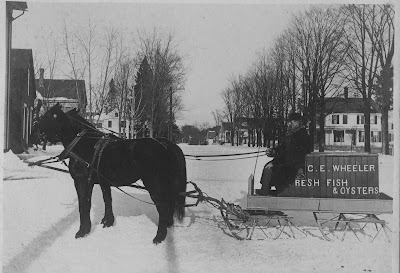 At the turn of the 20th century, winter roads were rolled by snow rollers such as Bradford's pictured below. Merchants such as Newbury's C.E. Wheeler used sleighs to make deliveries (photos: Bradford Historical Society). 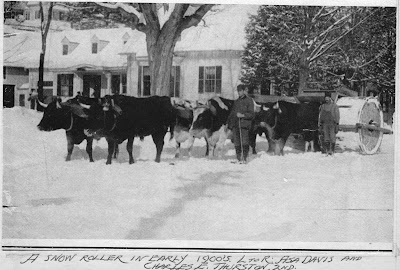 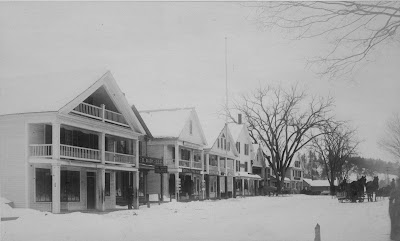 ‘Some people talk about the war, some about business and various other things at times, but ALL the people, ALL the time for the past week have talked about nothing, but the WEATHER.”
This comment from The United Opinion of January 4, 1918 could just as well be a current one, for it is winter in the Upper Valley. When told that this column would deal with snow and ice, one Vermonter, in true philosophical form, replied “We’ve got plenty of that ‘round here.” We love to talk about it, even when there is not a lull in the conversation. Likewise we recall, as with battles won, those record-breaking stretches of low temperatures or those times when we were snowbound by head-topping drifts.

According to Dr. Dupigny-Giroux, the Vermont State Climatologist, one of the noteworthy characteristics of Vermont’s climate is the tendency to stray from the normal thirty-year climate pattern. This column deals with three of these unusual weather events from times past. They are 1816--“the year without a summer”, the blizzards of 1888, and the winter of 1917-18, all beyond our living memory.

“Eighteen hundred and froze to death” and “the poverty year” was what New Englanders called 1816. According to David Ludlum’s The Vermont Weather Book, that year fell within the period of history known as the Little Ice Age (1650-1890’s). From 1815 to 1818 New England temperatures were even lower than the cooler average.

It was a period of volcanic activity in many parts of the world. In April, 1815, Mt Tambora on the Sumbawa Island of Indonesia erupted in one of the most explosive volcanic events in recorded history. The vast amounts of ash spewed into the stratosphere affected global climate for the next two years. Local residents recorded that the dust gave a “reddish glow” to the sun, its rays “destitute of heat.”

After an early spring planting, crops were destroyed in June by a spell of cold weather. It was “not much above zero in Bath on the 5th of June.” Up to six inches of snow fell in many parts of Vermont. Wells’ History of Newbury records that there was frost every month and “Moosilauke was white twice in July and three times in August.” A general drought that summer and a heavy frost on August 21 killed corn and potato crops. Some farmers kept fires around their fields just to save enough of the corn crop for seed.

Already weakened by the ravages of spotted fever, area residents now faced the prospect of diminished food and fuel supplies. There was fear of famine, although none was actually recorded. Corn was imported from down- country, sometimes selling for five times the normal price. Fish shipped from the seacoast made this the “mackerel year.” The grist mill at Ryegate ran full time, providing local residents with wheat and ground oats, the latter having been introduced by Scottish residents.

The following spring brought no relief, as snow in May and June again led to frozen crop plantings. The psychological impact was as great as the economic. Disheartened by seeing their “hard labors go for little or no return”, many Vermonters got “Ohio Fever” and moved their families to the rich farmland of the new western frontier.

Between 1816 and 1888, there were other record storms and cold temperatures. On May 15, 1834, a great snowstorm left up to three and a half feet of snow in Newbury. February 5-7, 1855 were believed to be among the coldest days ever experienced in the area. John Greenleaf Whittier may have been thinking about Vermont’s historic snowfalls when he wrote “Snow-bound” in 1865. Also Ralph Waldo Emerson when he described a household trapped and “enclosed in the tumultuous privacy of storm.” Both describe the conditions that would be experienced by area residents in the blizzards of 1888.

The first blizzard of 1888 struck the state on January 25-26. The editor of the St. Johnsbury Caledonian wrote: “The present storm is pronounced the severest ever known in this section of Vermont, the wind blowing a gale and the highways completely blocked.” One Strafford resident observed: “The hardest in memory. The roads remained blocked in many places so that business was suspended for three days.”

For a week, temperatures in Bradford ranged from 15 degrees to 30 degrees below zero and 15 inches of snow fell. Two engines were necessary to haul the trains through snowdrifts. The United Opinion summed it up with the comment: ”There is no news to chronicle this week outside the weather, which is simply beyond description.” As a result of this storm, Bradford voters authorized the selectmen to “investigate the use of snow rollers.” (see photo)

It was the Great March Blizzard of 1888 that set the record. Ludlum writes that this storm “stands unique in the storm annals of the northeast corner of the United States. No other atmospheric disturbance has brought together the combination of deep snowfall, gale-force winds and bitter cold -- the three ingredients of an eastern blizzard, in such an extreme degree over such a wide area as did this late-winter snowstorm.”

Called the “Great White Hurricane”, the blizzard started on Sunday March 11th and continued for two days. Up to four feet of snow fell in some parts of the state, especially in the southern half. By noon Wednesday, Woodstock had added 32 inches of snow to that already on the ground for a total of 78 inches or six and a half feet. Locally, 18-30 inches of snow fell, and with the high winds, snow drifted to the tops of houses. Burlington received 23 inches, Bennington 48 inches.
The Bellows Falls Times summed up the storm’s impact as:: “No paths, no streets, no sidewalks, no light, no roads, no guests, no calls, no teams, no hacks, no trains, no moon, no meat, no milk, no paper, no mail, no news, no thing--but snow.”

The winter of 1917-18 set records for sustained low temperatures. According to Haskins’s History of Bradford, starting in late December and continuing to early February there were forty consecutive days when the thermometer recorded temperatures below zero, and on thirty of those days it never got above zero.

Correspondents for The United Opinion from neighboring towns wrote of unofficial temperatures of 35 to 60 degrees below zero. In Newbury, there were five days when it never rose above nine below zero. Pipes froze and then froze again. The cold had a disastrous impact on the apple orchards of northern New England, with many older varieties destroyed.

The cold was made worse by the fuel, food and manpower shortages caused by the economic dislocations of World War I. Businesses, schools and churches closed to conserve fuel. This record of continuous cold stood for over a half-century. It has been challenged by the very low temperatures in December, 1989 and January, 1994.

More recent examples of extreme winter weather will have to wait for a future column. By the time this article is read, most area residents will be tired of thinking about winter. They also know that other extreme winter times will come, for in northern New England weather, aberrations are normal.
Posted by Larry Coffin at 8:21 AM