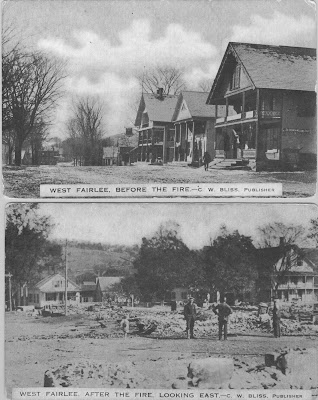 A vibrant West Fairlee village was gutted by major fires in 1909 and 1917. Few of the buildings were replaced (photos: West Fairlee Historical Society). 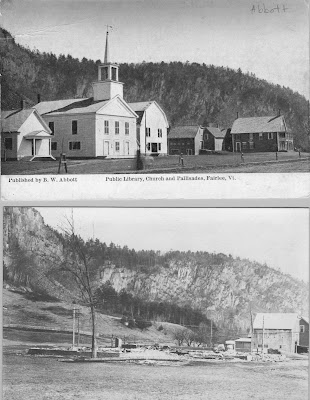 
They have occurred at least once in every local cluster of commercial and residential buildings. They are the disastrous fires that eat away major portions of village centers. They were more likely to have happened prior to the development of modern building codes and local fire departments with trained firefighters and modern equipment. The December edition of this column dealt with the fire that destroyed the heart of the village of Newbury in 1913 as well as the December, 1947 fire that decimated the east side of Bradford’s commercial district. As with Bradford’s earlier fire of 1883
(see February, 2007), the destroyed structures were quickly replaced. This structural revitalization was encouraged by community support for those affected by the fire.

This column deals with similar fires in other local villages from 1848 to 1953. It highlights those fires that destroyed multiple structures and dramatically altered the appearance of the communities in which they occurred.

Blaisdell’s Haverhill, New Hampshire describes the many fires that have occurred in the Town of Haverhill. The earliest one in the Haverhill Corner area was on April 19, 1848 when the Columbian Hotel and seven other properties on the west side of Main Street were destroyed. An eyewitness is quoted as saying “The only defense was a long line of men and boys, old and young, standing in line from the reservoir on the South Common, passing buckets of water down to the fire, a sight never to be forgotten by those who were eye witnesses.” The area was again visited by fire on February 19, 1902 when the Exchange Hotel, Batchelder’s Block and six other houses and stores were destroyed. “The rest of the village was saved by the deep snow on the roofs of the adjoining buildings.”

That same lack of adequate fire fighting equipment was mentioned in Blaisdell’s description of a fire that broke out in the early morning of May 27, 1900 in North Haverhill village. It began in the ell of the Eagle Hotel on the west side of Main Street and destroyed the hotel, its barn and stable as well as two stores and a house. “The only defense was a bucket brigade, until the arrival by train of a hose reel sent down from Wells River. By that time the spread of the fire had been stopped, aided by the wide lawn north of the Sleeper house.”
An earliest fire destroyed buildings in Wells River on September 26, 1892. Frederic Wells’ History of Newbury, Vermont, written twelve years later, describes it as “the largest fire which was ever in that village.” Lightning struck the stable of the Coosuck House on Main Street and destroyed the hotel and its out-buildings. It went on to consume three neighboring commercial buildings and three houses.

Destroyed were shops occupied by a barber, tailor, shoe maker, harness maker and a storekeeper. At least six families were left homeless as tenements and private dwellings burned. Wells’ concludes by listing the new buildings erected on the “burnt district” including Hale’s Tavern.

The description of a 1901Topsham fire in Topsham Sketches is entitled “The Great West Topsham Fire.” This “conflagration of major proportions” was ignited by a lamp knocked over in Dr. Joseph Dow’s barn. That house and barn were destroyed as were the adjoining church, two stores and three dwellings. At that time there was no village fire company. “The villagers soon built a new church and the property owners put up a new store and one new dwelling, but the remainder of the buildings have never been replaced.”

A more recent Topsham fire broke out in Waits River village on Friday, July 31, 1953. The August 7th edition of The United Opinion described it as a blaze that threatened to wipe out the village. The fire started out about 12:30 p.m. in the Flint Brothers’ bobbin mill along the north side of the Waits River. It started when a container of wax ignited, spreading fire to “the ancient wooden building, crammed with wood products.” Almost without a break, the fire leapt across the mill yard and up the hill to envelope Hood’s General Store as well as the homes of the Bragg and Welch families. Sparks flying on “the gusty wind” then ignited a home several hundred yards away resulting in its total destruction. The steeple of the Methodist Church also caught fire, but it was checked before serious damage was done to the main portion of the building. Embers ignited a forest fire miles away in the neighborhood of the Appleton Farm. As the village had no fire company, equipment from neighboring towns, augmented by a privately-owned 1931 fire engine from East Orange, and passing motorists fought the blaze.
On the morning of September 6, 1934, a fire destroyed the library building in Piermont along with the neighboring Gould’s Store and part of an adjacent dwelling. Five fire departments from surrounding towns were called to fight the flames and it was their efforts that saved adjacent property. Harry Gould rebuilt his store and reopened on October 6, just a month after the fire. The following November a town meeting postponed the building of a new library, but did vote to purchase fire fighting apparatus. Volunteer efforts reestablished the library in a private dwelling until the town voted to purchase the Methodist Church to use as a library several years later.


The United Opinion article that described this disaster also contained the headline “Waits River People Look to the Future After Big Fire.” In August, a special town meeting voted overwhelmingly to exempt from taxes for a period of five years buildings erected to replace those destroyed. Repairs were begun immediately on the church and a new store and connected home were built where the destroyed ones had stood. Two of other houses were repaired or replaced. That August a meeting was held that resulted in the creation of the Tri-Village Fire Department for Waits River, East Orange and West Topsham. The mill, Waits River’s only industry, was rebuilt by the Flint brothers, but was destroyed a decade later by a second fire. The existence of the fire department kept this second fire from reaching other buildings in the village.

No community has been more permanently affected by fire than the village of West Fairlee. Local sources including historian James McDade describe West Fairlee Village at the turn of the 20th century as “a bustling place, with several general stores, a hotel, drug store, jeweler and a couple of large commercial blocks”. (see photo) Three fires between 1908 and 1917 caused most of those buildings to disappear with few replacements. ”West Fairlee Burned” was the headline in The United Opinion reporting on the nighttime fire of September 29, 1908. “It was a hard fire for that little village as it completely wiped out the business portion of the place.” Of unknown origins, it began in a large livery barn on Main Street and spread to neighboring residences, stores and the Eagle Hotel. The news report concluded “It was only the heroic efforts of the people present that other buildings were saved from being burned.”

In October of the following year, a second fire started in a store that Clarence Little had established in the Whitney Block after his store had been destroyed in the earlier fire. This fire spread west along Beanville Road, taking a doctor’s home and office, and north along Main Street burning a house and barn. In 1917, a third fire began in a house built on the site of the doctor’s destroyed home, and it went on to flatten the Eastman block and an adjacent house.

When asked why most of the buildings destroyed in the fires were not replaced, McDade said that the adjacent copper mines had created a “boom town” economy in the village. When the mines closed and half the economic base disappeared, the village was left with surplus “infrastructure.” While some buildings were built on the vacant lots, the face of West Fairlee village was changed forever.

This two-part article began with a reference to Fairlee’s Colby Block fire of May, 2007. That fire illustrates that even modern firefighters cannot always prevent the spread of a stubborn blaze. Just as Fairlee might look to the attitudes of hope and programs of rebuilding of other villages over the past decades, it might also look to its own history. On December 5, 1912, a fire destroyed three important public buildings on the west side of Fairlee’s Main Street. Beginning in Stebbin’s harness shop, the blaze destroyed the adjacent Opera House, church and library. Robinson’s A History of Fairlee, Vermont describes a familiar picture, “the fierceness of fire against only a few hand extinguishers.” Fairlee’s “will and determination” were not destroyed by this disaster, “for the next day plans were made for the future.” Within two years the present Federated Church and Town Hall had been built.

There have been literally hundreds of individual structures destroyed in our area by fire in the past two centuries. Some of those have been important businesses or public buildings; others have been homes or barns. Only those who have had their personal property destroyed by fire can understand the feelings of loss one experiences when sifting through the ruins of a home or business.

What is important is that none of the fires reported in this column resulted in loss of life. What is to be recalled is that in most cases towns people rallied to support those who suffered loss. They also supported the development of modern fire companies. What is to be celebrated is that many looked beyond the immediacy of disaster with hope for the future. These are lessons of times past, hard learned.