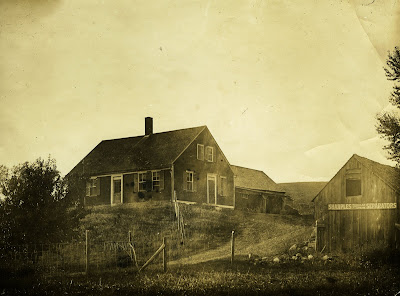 From this house in the Rice's Mills section of Thetford, midwife Bathsheba Wallace rode out to deliver 1.666 babies during 42 years of practice. The house no longer stands. (Photo courtesy of the Thetford Historical Society) 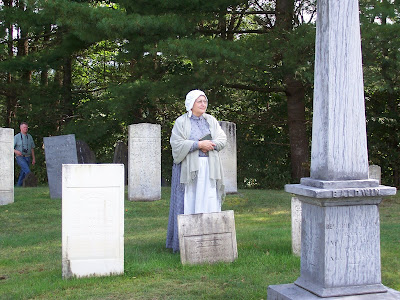 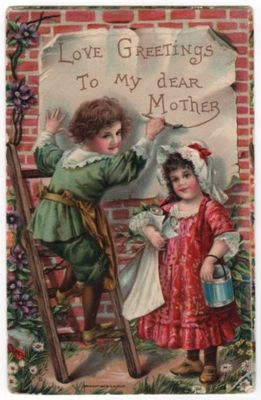 “She may not be the most perfect woman, but she is indeed an extra ordinary woman.” That line is from a poem by Grace Mdemu. For Mother’s Day 2009, this column celebrates four local extraordinary women from times past who received great recognition.

In early America, women were usually described only by their relationship with the men in their lives. The most recognition that women could hope for outside of their home was “the dignity of anonymity.” Within the family setting, their work was literally never done. Their worldly goods along with their bodies were the property of their father or husband. They raised the children they birthed, made meals from food they grew and washed the clothes they handmade. They supported their men folks and did double duty when they were away. Their title of honor was goodwives. Today we would call them super moms, ordinary women doing extraordinary things.

Few women in early America were able to have such a profound impact on the establishment of new churches and the encouragement of the ministry as Mother Margaret Appleton Peckett of Bradford. Mother Peckett came to America with her family and settled briefly in North Haverhill. In the winter of 1779-1780, they settled in the wilderness of Bradford, then known as Mooretown. She was of the Methodist faith and had served in the English household of John Wesley, founder of Methodism. Both she and her husband Giles were “ardent Methodist in belief.”

There was no preaching of any denomination in Bradford when the Pecketts arrived. According to Bradford historian Silas McKeen, they opened their home “for religious services for any Christians, ministers, or people that love the Savior, irregardless of their denomination.” Margaret Peckett taught “the peculiar forms and usages, not only of early Methodism, but of the founder of Methodism.”

Her home became a small seminary where she trained a group of young men as pioneer Methodist preachers. These included Martin Ruter, Laban Clark and others whose influence was felt throughout the northeast and as far away as frontier Texas.

Martin Ruter was a pastor in Boston and Philadelphia, before moving to the Midwest and then to Texas. In his lifetime, he was the president of Alleghany College in Pennsylvania and founded Ruterville College (now Southwestern University) in Texas. He was also the founder of Augusta College in Kentucky, which although no longer in existence, was the first of what has become a world-wide network of Methodist colleges. As a Texas circuit preacher he logged over 2200 miles in a single year.

Laban Clark was an outstanding Methodist leader and one of the principal founders of Wesleyan University in Middletown, Connecticut. The level of influence of these and other early Methodists was an outgrowth of the training they received in Mother Peckett’s Bradford home.

According to Troy Conference historian, Ouida Schwartz, the Pecketts encouraged the family of John Langdon of Vershire to organize a Methodist group in 1791. Mother Peckett assisted in building a church in Vershire and a subsequent one at Corinth Corners. These are among the earliest Methodist churches in Vermont.

Margaret Peckett died in the spring of 1802 “strong in faith, giving glory to God.” It was written of her: “This venerable lady…had an important instrumentality in the introduction of Methodism into Vermont.” She certainly deserves the title given to her by her denomination, “Mother of the Troy Conference.”

Two contemporaries of Mother Peckett are the local midwives Bathsheba Rich Wallace of Thetford and Lydia Peters Baldwin of Bradford. Both have, in recent years, been recognized by their respective town historical societies as extraordinary women.

The birthing process, prior to the mid-nineteenth century, was one with only female relatives, neighbors and midwives attending. Laurel Thatcher Ulrich has written widely on early American women in general and midwives in particular. She writes: “rural midwives were capable of managing difficult as well as routine births…” Although little is known of their training, it is assumed that they acquired knowledge of this ancient female craft by practice and observation of more experienced midwives.

Ulrich’s study shows that, “the need for medical intervention was by no means obvious, and that puerperal infection, though present, was still only a random problem in the later years of the eighteenth century.”

Lydia Peters was born in Hebron, Connecticut in 1741 and married Benjamin Baldwin in 1761. They moved to Orford in 1766, being among its earliest settlers. Ten years later, they moved to Bradford where other members of the Peters and Baldwin families were living.

Silas McKeen wrote: “(She) was a woman highly distinguished for her cheerfulness, resolution and energy. Besides bringing up a large family of her own, and managing her domestic affairs in an exemplary manner, she for many years was extensively, and with remarkable success in the practice of midwifery.”

Her practice included Bradford, Corinth, Fairlee, Piermont and Orford. When called, regardless of the weather or time, she went. She rode sidesaddle on her own mount or on a pillion behind the man who had come for her. Baldwin kept a careful diary of her work. Her notes included the name of the father of each child, the sex of the child and the date.

She charged a few shillings for her services and was often paid in goods or services rather than hard money. In over fifty years of practice she delivered 926 children including 10 pairs of twins. Of this number, 26 babies were still-born and 7 were illegitimate. Only one mother died of complications while Baldwin was in charge. She performed her last delivery at age 78.

Baldwin was, to use Ulrich’s description of another midwife, “a ‘gifted’ woman, a skilled practitioner, careful about her fees and sure of her methods.” She died on September 3, 1825 at the age of 85.

The second midwife, Bathsheba Wallace was born in 1752 in New Milford, Connecticut and moved with her parents to Strafford around 1773. She married Richard Wallace in 1776 and moved to Thetford. In the years following the Revolution, Wallace became skilled as a midwife in Thetford and six other area towns.

A paper written by Thetford Historical Society’s Martha Howard points out: “She was an accomplished horsewoman, and her sorrel mare with Bathsheba astride must have been a welcome sight to laboring women in need of her care. Day and night, good weather or bad, Bathsheba responded to requests for assistance. She and her horse are even credited with crossing the swollen Ompompanoosuc River on a bridge stringer to reach a woman in distress on the other side.”
In an article in the United Opinon of January, 4, 1895 it is written that: She was the mother of eleven children, nine of whom lived to maturity. While her husband Richard was in the service [the American Revolution], "she walked six miles to see their crops, and finding the oats ripe, mowed, dried and stacked them, and enclosed the stack with a pole fence. She afteward cut the corn and dug the potatoes."
In the 42 years that Wallace practiced, she delivered 1,666 children, including 21 pairs of twins. No mother ever died in her care. Records show that she was not only paid for her service, but was in personal control of her earnings, a practice unusual at the time. She acquired the title Granny Wallace, “a common term of respect and affection that was given to women who worked as midwives.”

The record of success of both Wallace and Lydia Baldwin, was difficult for physicians to replicate as the practice of midwifery was replaced by the male-dominated medical profession’s control of delivery.

In May of 1832, Wallace fell ill. John Fanestil described her death in an article in Christian Century: She died surrounded by a large number of adults and children, “the majority of whom she herself had ushered into the world,” They sent her off with scripture, song and prayer. Howard writes that this gathering was, “a comforting completion of a circle…”

Calista Robinson Jones of Bradford earned her distinction as national president of the Woman’s Relief Corps (W.R.C.) in 1901. The Corps was the women auxiliary of the Grand Army of the Republic, the organization for Union Civil War veterans.

This national organization had as its goals the perpetuation of the memory of Civil War veterans, care for their widows and orphans and the “teaching of patriotism and duties of citizenship, the true history of our country and the love and honor of our flag.” Further they supported “the American principles of representative government, equal rights and impartial justice for all.” They also added to their causes the teaching of the humane treatment of animals.

Jones was born in Chelsea in 1839, took courses at Rutgers and was teaching in Chicago when the Civil War broke out in 1861. Returning to Vermont, she married Charles Jones of Bradford. In 1886 she was a charter member of the Bradford chapter of the W.R.C. Over the next 15 years she held ever more important positions in the state and national organization.

Upon her election in 1901, she appointed her daughter, Mary Ellen Conant, national secretary and established the national headquarters at her home on North Main Street. Public congratulations were offered by the The United Opinion: “Mrs. Jones is especially qualified for this high office as she possesses the requisites of executive ability, dignity and grace.”

During her year as leader she worked actively to carry out the functions of her office and the goals of the 144,000 member organization. This included visiting many of the state departments of the organization. She promoted Memorial Day and Flag Day observances. That these two later become national holidays was, in part, the result of the ongoing work of the W.R. C. Jones also served on the committee that sought to have the infamous Civil War prison property at Andersonville, Georgia honored as a national historic site.

In October 1902, Jones presided over the national convention of the organization held in Washington D. C. On the convention delegates’ badges she had placed the picture of Admiral Charles E. Clark of Bradford. In her report to the convention she said that Clark “stands today in the hearts of the American people as a true hero.”

In addition to her work in the W.R.C., Jones was active as in the Congregational Church in Bradford, the local D.A.R. and was a trustee of the Bradford Public Library. She died in Bradford on January 28, 1913 at the age of 74. Bradford historian Harold Haskins wrote: “Because of her, many people all over this country heard of Bradford…Calista Jones went far and did well.”

Silas McKeen wrote a comment on the life of Lydia Baldwin that serves well to summarize the honor accorded to her and the other three remarkable women mentioned above: “A woman who accomplished a work so great and good, deserves to be held in honorable and lasting remembrance.” Mother’s Day is a reminder to honor all the remarkable women in our lives.