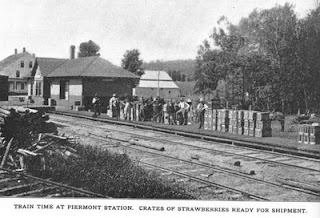 For over 130 years, June in Bradford meant berry time. The Bradford berry was as closely connected to the reputation of this town as Farm-Way, Elizabeth’s Park and the Colatina Exit are now. Writing in the Inter-State Journal in July, 1901 Mrs. L. D. Clements recalled that in 1875 “Win” Smalley planted a quarter acre of strawberries on his farm on the Lower Plain. His experiment was so successful that within seven years he had increased his acreage to ten. In 1884, Smalley picked 1,000 bushels.

In the June 25, 1886 edition of The United Opinion, the following notice appeared, “Strawberries are selling this week for three baskets for twenty-five cents and they are delicious too.” By 1888, the number of growers had increased to 11, located on the Upper and Lower Plains and the Plateau. The sandy loam soil laid down on these ancient river terraces was suited to the growing of strawberries.
The Orange County Gazetteer of that year did not list more than two other growers in neighboring towns, although later there were a few in adjacent portions of Fairlee, S. Newbury and Piermont. Between1886 and the post WW II era there were also several growers in Haverhill, Piermont and Orford.

Among the Bradford growers were Freeman Clements, Joseph Gardner, Johnson Golden, William Gove, Everette McDuffee, Harry Martin, Henry Ormsby, Horace Renfrew and Arad Jenkins. Jenkins was the grandfather of Margaret Jenkins Pratt whose memories of growing up as part of a strawberry dynasty gives us insight into the industry.

Jenkins had purchased a farm on the Lower Plain in 1856 and joined his neighbors in growing strawberries. In 1893 he sold the 90-acre farm to his son, Maitland Jenkins. Within a few years, “Mait” had enlarged the farm to 500 acres and replaced Win Smalley at bringing in the largest strawberry crop in town.

Using the Gerry Brook, from which the farm took its name, he became the first grower to use irrigation. A Vermont Department of Agriculture report on his methods mentioned his earned title “Strawberry King” in their description of his unique use of gravity irrigation.

Margaret Pratt recalled that beginning in mid-June there would be30 to 50 pickers in the fields. Families would pitch tents and stay for the season. Some families brought old cook stoves; others cooked over open fireplaces. They did their laundry in the nearby brook and if they had the courage, took a cold bath there also. One such family was that of Andrew and Mary Emerson who picked at the Jenkins place for 33 consecutive years and earned a reputation as outstanding pickers.

The work began at dawn and continued until the rows were picked clean of ripe fruit. The field boss kept them at their task. Children often required extra supervision. Shanties were set up in each field, where baskets were brought to be inspected and counted.

It was important to keep track of time so that berries could be delivered to trains that came at least four times daily. As pickers were paid by the quart, this tallying took on an extra importance. Near the end of the season, when a man could no longer make a day’s pay, the pickers went home to tend to their own summer chores.

Most of the berries were shipped from the Bradford and Piermont Crossing stations to consumers in the White Mountains, Boston and New York. The production of June 24, 1901 set an early record with 300 bushels shipped. According to Margaret Pratt and others, hotels and stores would advertise “Bradford Berries” even if the product came from other locations. The demand was so great that a siding was build at Gove Crossing just north of the Fairlee line, and trains took car-loads of berries from there during the height of the season.

Mrs. Pratt recalled that crates of 32 quarts were tagged showing their destination. The 1938 receipt book for the Railroad Express Agency at Bradford’s Piermont Crossing for June 25th showed that M. A. Jenkins shipped 19 crates of berries valued at $12 per crate on a north-bound train to customers in Littleton and Berlin, NH.

This same book showed that the early crop brought $15 per crate with the price falling to as low as $11 as the supply increased. When his son-in-law George Pratt took over the operation of the farm he used a truck to carry berries to Boston, thus delivering a fresher product to that market.

Sometimes when there were more berries than could be sold wholesale or from roadside stands, growers would sell them as “hulling berries.” Pickers would hull the fruit which was then put in milk cans with sugar and sold to the Neapolitan Ice Cream Company.

Earlier records fell as new varieties and methods were introduced. The largest crop reported was 1200 crates in the early 1940’s from the Jenkins-Pratt farm. The total annual crop for Bradford exceeded 30,000 quarts of extra-fine berries, as expertise and competition lead to a quality product. One local competitor was the Ernest farm in Piermont which had an annual crop of over 700 bushels for many years.

Many area residents share memories of picking berries as youngsters. Bea Nutting recalls beginning in the late 1920’s at the Rice farm (location of the present Appleton farm) and for Arthur Clogston who had fields on both the Lower Plain and on the Plateau, She also picked at Robert Renfrew’s fields adjacent to the Connecticut River on the Lower Plain.

She recalled that at noon the Renfrew pickers would be invited up to the house to share strawberry shortcake. Ruth Morrison, Bob Benjamin, Eris Eastman and Russell Batten all recall picking for Clogston, Jenkins or Paul Demick at 2 or 3 cents a quart in the 1930’s and 40’s. In the 1950’s the pay was increased to 8 to 10 cents. Children would pick berries to make money to buy school clothes or supplement the family income without regard for child-labor laws.

Other memories are of strawberry shortcake shared by the family or purchased from a local strawberry festival. Strawberry shortcake became popular in the 1850’s and can be described as one of the most American of desserts. Purists demanded that the sliced, not mashed, slightly sweetened fresh fruit be served between sliced baking powder biscuits topped with real whipped cream. The Bradford Community Club began holding a strawberry festival in 1954, an event now continued each summer by the local Eastern Star and Masonic chapters.

Raising strawberries in the Connecticut River valley meant being at the mercy of weather, plant diseases and marauding wildlife and insects. Early predictions for bumper crops could easily be diminished by heavy rain. Increased competition in the 1960’s from out-of-state growers and frozen strawberries caused the number of growers to decline significantly.

David and Sara Pierson of the Pierson Farm alone continue the tradition of the Bradford berry. David’s grandfather Ralph Pierson began growing strawberries after World War II near the corner of Routes 5 and 25.

The present operation was begun in 1979. Pierson recently indicated that, like growers of the past, the farm is at the mercy of weather, higher production costs and changing demands. Local pickers are difficult to find and fewer families come to pick and preserve for their own use. Local competition to the Bradford berry now comes from the Four Corners Farm in South Newbury, Farmer Hodge’s in Fairlee and Crossroad Farm in Post Mills.

While it is possible to buy strawberries outside of the local June-July season, there is a unique delight in picking a basket of local berries right from the patch, eating a few as you pick and taking them home to serve on a shortcake or in a pie. No berry imported from California or Chile can compete with that for memory making.