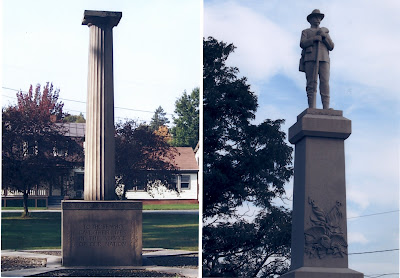 Fairlee's Soldiers' Monument, an elegant statement of that community's gratitude (left).
Haverhill's monument was dedicated in 1912 to those who served in earlier wars (right) 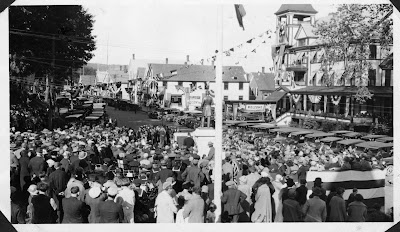 They stand at roadsides, in parks and on commons. They are made of bronze, granite and limestone. Most are well kept, with new flowers and flags added annually. They are generally forgotten by the public except at special celebrations; artistic works so familiar that they blend unnoticed into the landscape.

They are the memorials that communities raise to recognize the heroic military service of local residents. They are more enduring than the historic place markers erected on roadsides by the States of Vermont and New Hampshire. They are more public than the gravestone that marks a hero’s final resting place. They are our most precious public memories solidified.

Public memorials first appeared in this area in 1912. Both Newbury and Haverhill used the 150th anniversary of their respective towns to memorialize their history in stone. In the week of August 11, 1912, Newbury dedicated a series of monuments recognizing the Bayley-Hazen Road, the old statehouse and other historic sites.

A high point in this celebration was the dedication of the General Jacob Bayley monument on the Newbury Common. The History of Newbury, VT states that, “as many as 3,500 people witnessed the unveiling ceremony, no doubt the largest gathering ever to assemble in town.” The monument recognizes the roles of this local Revolutionary War hero as a patriot, pioneer, soldier and citizen.

Across the river, Haverhill dedicated its Soldiers’ Memorial in North Haverhill on September 20, 1912, as part of its anniversary celebration. Carved of Barre granite, this monument features a Civil War soldier in arms at parade rest. The plaque on the front reads “In Commemoration of the Service of the Soldiers of Haverhill in the Wars of the Country, Erected by the Town and Womens’ Relief Corps, No. 11” The other plaques list Haverhill’s soldiers in the War for Independence, the War of 1812, the War with Mexico and the Civil War.

It is service of local individuals in World War I, “the war to end all wars,” that inspired the next group of public monuments. In 1920, Orford dedicated a monument whose bronze plaque reads, “Erected in honor of those men and women of Orford who were in the service of the Nation, the Allies and Humanity during the years when the German Armies attempted to conquer the Civilizations of the Earth, and failed.” It lists the men and women who served. Originally placed the middle of the intersection of Main and Bridge streets, this monument now stands on the mall next to the Orford Congregational Church.

In June, 1921, a World War I monument was dedicated at Haverhill Corner. Its plaque lists those citizens of Haverhill, Pike and East Haverhill who served in the World War 1914-1918. Piermont also created a small park in the center of the village with a simple granite and bronze marker listing its honor roll.

In August, 1921, Bradford dedicated a Memorial Park in the triangle north of the Library. United Opinion editor Harry Parker was instrumental in creating a Memorial Park Association, promoting the public subscription campaign and preparing the park for the dedication of a war memorial.

Originally the plan was to memorialize service in the recent war, but enough money was raised to include previous wars’ honor rolls. There was already a small monument placed there by the parents of those from Bradford who had lost their lives in the 1918 war. With the assistance of the Village of Bradford and the Sons and Daughters of Liberty, a larger granite monument was erected bearing bronze tablets with the names of the soldiers and sailors of the Civil War, the Spanish American War and the World War. A copper box containing items ranging from copies of the Bible and the Constitution to articles showing activities characteristic of Bradford was placed under the monument.

It is Fairlee’s Soldiers’ Monument that is perhaps the area’s most beautiful piece of public memorial art. A gift of summer resident Arthur Stone of New York, and made of Indiana limestone, this monument was dedicated on August 11, 1926. The United Opinion report of the dedication states that over 3000 people were present for that Fairlee Day. Participants in the dedication included the Governor and two members of the Vermont Congressional delegation.

The monument is a plain Doric column atop a square pedestal. While there had been discussion of listing the names of those being honored, either on a bronze plaque or cut in the stone, the decision not to was a wise one. Congressman Ernest Gibson noted that the simple inscription, “To Those Who Gave Their Lives in the Service of Our Nation” was “all that could be said.” Participants could not have imagined that Fairlee residents would be involved in an even greater war sixteen years later. This monument continues to stand as Fairlee’s eloquent symbol of gratitude for service in each new war.

Bradford’s Spanish-American War hero Admiral Charles Clark had been the honored speaker at the 1921 Memorial Park dedication. Following his death, his hometown decided to place a statue of Clark there. Clark had been the captain of the battleship Oregon and played a pivotal role in the naval victory against the Spanish fleet at Santiago Harbor, Cuba on July 3, 1898. Editor Harry Parker again played a leading role in raising the funds for the statue. The sculptor was Magnus Urdahl and it was made in the foundry of Albert Russell & Sons in Newburyport, Massachusetts. The pedestal is of Barre granite with bronze plaques commemorating Clark’s accomplishments. On Tuesday, October 12, 1926 over four thousand people including Clark’s widow and numerous dignitaries watched as little Virginia Cole unveiled the statue. Buildings in the area were draped in patriotic bunting and the U.S. Marine Band played. It was, in Parker’s words, “Bradford’s red letter day.”

While World War I monuments were dedicated while the memory of service was fresh, World War II memorials were less quickly erected. As with the Civil War, they have only appeared as the veterans grew older and the memory of their sacrifice dimmed. It was only in 2004 that a national World War II monument was dedicated on the Mall in Washington, D.C. It seems that a nation with a large military commitment around the world and almost constant conflicts cannot decide how to honor in stone those who continue to serve. A monument erected by a small community at one time is almost immediately outdated by the next conflict.

Honor Rolls hanging from walls of town or veterans’ halls fill the purpose for some towns. In Newbury the memorial is a small stone placed on the Village Green adjacent to a flag pole. It is inscribed with the words “In Honor of Those Who Gave Their Lives In Service of Their Country.” In 1965, Bradford dedicated its Memorial Field and placed there a monument with similar wording. The American Legion flagpoles in Woodsville along with War Memorial plaque at the Legion Home honor Haverhill’s contributions to America’s more modern conflicts

More recently there is a desire to have a permanent listing of the names of the servicemen and women who called these towns home. About 1989, Piermont replaced a wooden honor roll with a bronze plaque added to its World War I memorial listing those who served in the Second World War as well as Korea and Vietnam. On November 11, 2003 Orford dedicated a World War II memorial with seventy-two names inscribed. Bradford is currently considering the placement of a permanent honor roll monument.

With the exception of the Bayley and Clark monuments, all the memorials mentioned have honored the common serviceman and woman. They represent the deepest respect for those who served and especially for those who died. They constitute an important part of our “community of memory.” It is within that
community that we say to those who served: your service is appreciated and your sacrifice is honored. We will not forget that the life we enjoy is built upon the service you have performed.

As is inscribed on the Bradford Memorial Field monument, those who served, “gave their today for our tomorrow.” We will remember.
Posted by Larry Coffin at 4:29 AM