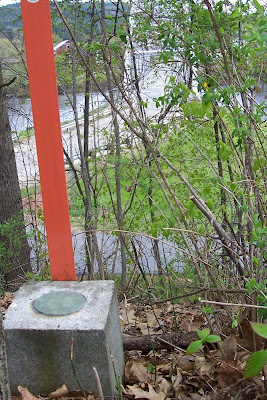 In 1933, The U.S. Supreme Court ruled that the normal western water line of the Connecticut represented the boundary between Vermont and New Hampshire. This marker near the Piermont/Bradford bridge reflects that settlement. 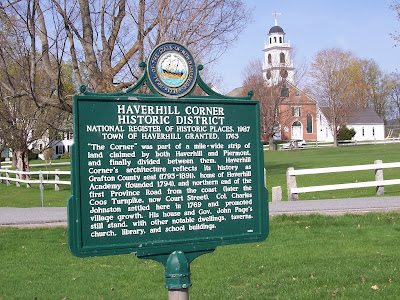 This historic marker on Haverhill's common is a reminded that Haverhill Corner was once disputed territory. 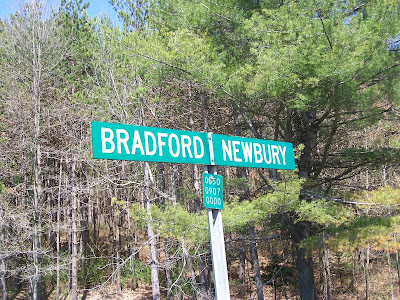 The town line between Newbury and Bradford has been moved twice, once about 1778 and again in 1996. Newbury now claims 1.2 miles of land along this boundary.

THIS ESSAY IS JUST ONE OF TWENTY-ONE AVAILABLE IN THE E-BOOK, “IN TIMES PAST, ESSAYS FROM


THE UPPER VALLEY” AVAILABLE ON KINDLE FOR $9.99. PROCEEDS BENEFIT THE BRADFORD PUBLIC LIBRARY, BRADFORD, VT. NO HARD COPIES ARE AVAILABLE.

Originally published on May 14, 2008 Journal Opinion
Seventy five years ago this month, the United States Supreme Court rendered the first of two decisions establishing the eastern boundary of Vermont at the western low water line of the Connecticut River. This court case would settle a dispute dating from 1749. It, like so many other land disputes that helped to shape Vermont, arose from the desire for land. In Europe, land ownership was the basis of power, held by a minority. The possibility of land ownership in New England was a major enticement for immigrants, and successive generations moved out from the coast in search of new land. Being able to claim a piece of land as one’s own was established early as part of the American dream.

The first decision regarding the Connecticut River as a boundary was made by King George III in 1764 to resolve disputes between the provinces of New York and New Hampshire. This dispute arose because Benning Wentworth, the Royal Governor of New Hampshire, had, between 1749 and 1764, issued grants for towns in what is now Vermont. In order to establish a claim to the land, Wentworth chartered a number of towns beginning with Bennington on the western boundary. Many local towns on both sides of the river were granted to proprietors by Wentworth, exceptions being Bradford and Vershire. Grants were often made to Wentworth’s supporters and relatives who rarely settled the frontier towns.

To counter these claims, New York issued overlapping patents to some of the same land, including grants in the Connecticut River valley. Bradford received its grant from New York in 1770, a charter that insured the rights of those families that had “pitched” on the unchartered land. Vermont emerged, according to Harold A. Meeks in his Time and Change in Vermont, “out of the bewildering array of claims and counterclaims.” Objection to the rule of New York helped to establish the basis for Vermont’s 1777 declaration as an independent republic.

Despite Vermont’s efforts in the Revolution, conflicts with New York and New Hampshire stood in its way of joining the union as the fourteenth state. Political and economic competition was the basis for conflicts over boundaries. In the Connecticut River valley, towns on the east side objected to the so-called “Dover Gang” that held political power centered around Portsmouth. Neighboring Vermont towns had similar objections to the influence of the power structure of the western sections. There was a failed move to create a new state using the Connecticut as a unifying feature, the proposed capital of “New Connecticut” being Dresden (now Hanover).

In 1778, seventeen towns in New Hampshire joined Vermont. General Jacob Bayley of Newbury, and other local leaders, supported this effort to balance western political influence, but in 1779, the union was rejected. Two years later, a second attempt was made to extend the borders of Vermont. The Western Union of fifteen towns in neighboring New York and the Eastern Union of thirty-four towns in New Hampshire were annexed to Vermont.

In 1781, the Vermont General Assembly met in Charlestown and Elisha Payne of Lebanon was elected as Vermont’s lieutenant governor. Towns in our area supported the inclusion of the New Hampshire towns, but not those from New York. However, in 1782, these unions were returned to their respective states. Vermont’s expansionist period was over and as other conflicting claims were settled, statehood became a reality in 1791.

But through the years, the conflict over the exact boundary between Vermont and New Hampshire continued. Boundary commissions were established by Vermont in 1792, 1794, 1830 and 1912. As canals, dams and bridges were constructed, disputes over tax revenue on property worth millions of dollars and costs of bridge maintenance mounted. In 1915, Vermont decided to bring an original jurisdiction case to the U. S. Supreme Court. Vermont claimed the line was along the thread or middle of the river’s channel, whereas New Hampshire claimed to the westerly margin of the river bank

Attorney Warren Austin, who would eventually serve as a U.S. States Senator and the first Ambassador to the United Nations, was appointed to work on Vermont’s case in 1925. In a 1931 letter, written just after he announced his candidacy for the Senate in a special election, Austin outlined the case and the problems in preparing it. He hoped the case would, “definitely and finally determine the boundary.”
The letter went on to described the bureaucratic problems that had delayed the preparation and presentation of the case. He wrote how important the case was in deciding issues ranging from hydroelectricity to, “the administration of law, riparian rights, navigation, booming, damming, bridging, civil liability for damages and criminal liability for crimes.”

The case was finally presented before the Court in April, 1933. On May 29, 1933, it was decided by the Court that the boundary between Vermont and New Hampshire was the normal low water mark, on the western bank of the river. In a second decision in January, 1934, the Court ordered that appropriate markers should be placed along the river to mark the boundary (see photo). In our area there are markers at every crossing from Thetford to Ryegate.

Since that time, the two states have made a number of agreements relative to the legal, commercial and recreational uses of the river. In August, 2005, Governors James Douglas and John Lynch met at the Cornish Covered Bridge and, in a moment of banter, Lynch “asserted a claim of territoriality” over the river.

The boundaries of Vermont with New York, Massachusetts and Quebec were also were the subject of controversies and adjustments in the years following the establishment of the state. Those who are interested can find additional details in Harold Meeks’ book.

“Out of a bewildering array of claims and counterclaims, Vermont emerged as a hodgepodge of political units.” Meeks asserts. As with border disputes between states, boundary disputes between adjacent towns were frequent and not easily settled. Many of these conflicts arose from what Attorney Paul Gillies calls “overzealous surveying and granting.”

One of the most significant disputes arose over the location of the border between Newbury and Bradford. Two conflicting surveys establishing the boundaries of towns on both sides of the Connecticut led Bradford to claim that approximately 6000 acres was unfairly being held by Newbury. This would place the boundary about 1.2 miles north of its present location. In fact, according to Wells’ History of Newbury, Vermont, the settlers of this area of South Newbury attended town meetings and paid taxes to Mooretown (now Bradford) before 1778.

A survey by Newbury’s Jacob Bayley showing the south-east corner of Newbury at its present location was accepted by the Vermont Legislature in establishing Newbury’s claim. This makes Newbury one of the largest towns in the state. In 1996, a slight adjustment made in that boundary caused Susan and Bruce Schlenker to begin paying taxes on a portion of their Route 5 property to Newbury rather than Bradford. When asked about that adjustment, Susan said “I guess that Newbury finally wanted their share.”

A similar dispute existed over the border between Haverhill and Piermont. In October, 1781, a compromise was reached representatives of the two towns. Piermont was awarded the eastern portion of the disputed territory and Haverhill the western. There is an historic marker at Haverhill Corner mentioning that compromise. While Piermont’s eastern share was the site of a later whetstone quarry, Haverhill was the winner in the division as it got the rich farm land and beautiful village along the river.

In 1783-4, the boundaries of Topsham, as with several other area towns, were established by James Whitelaw of Ryegate, Vermont’s Surveyor General. Conflict between this survey and earlier ones caused disputes between Topsham and the adjoining towns of Groton and Newbury. In 1803, Topsham gained from Newbury a strip one mile wide along the boundary between the two towns. The area was referred to as the Topsham Gore. This dispute, as with Haverhill and Newbury cases above, according to Wells, probably resulted because the two river towns “were settled when the land around them was ungranted, and the proprietors made the towns as large as they could.”

In Corinth, there was some uncertainty as to the line between that town and Bradford, the so-called Bradford-Corinth gore. This led one David Davis to think that he lived in Bradford when his daughter Mary was born in 1772. According to the History of Corinth, Vermont, this little girl might actually be the first child born in Corinth.

That history also describes a conflict that broke out when Corinth Corner farmers, “almost came to blows with Vershire claimants of land one mile wide along the south border.” This land had been granted to Vershire by act of the legislature in 1803. Three farmers, fearing a court fight, sold their property to Col. Asa Porter at a reduced price. When, in 1804 the legislature reversed its decision, Porter “profited handsomely by his accommodation to worried men.”

No town has been more affected by land disputes than Fairlee. Initially chartered in 1761, it was slightly larger in size than the normal thirty-six square miles. In the years after settlement, a conflict broke out that would change the boundaries of the town. This resulted, according to Robinson’s Fairlee history, from a dispute between two men.

General Israel Morey was a major landowner in the eastern section and Nathaniel Niles in the west. Both of them were active in local politics and Niles was especially active in state government, including two terms in the U.S. House of Representatives. The town as initially established was just too small for these two large personalities and so in 1797, the town asked the legislature to partition it into two towns. Divided along the heights that bisect the town, they became (East) Fairlee and West Fairlee.

Bradford surveyor Byron Kidder, in practice since 1974, is well versed in dealing with the contradictory information that sets the boundaries between political entities as well as individual property owners. In a recent interview, he said that, because of these contradictions, “surveyors are historians and detectives, often going back to the original creation of boundaries.” He agreed that current controversies, small though they may be in comparison to some in the past, are still about the prize of landownership and all that goes with it.