On June 14, 1913, a "great conflagration" destroyed the center of Newbury Village destroying over 25 structures. 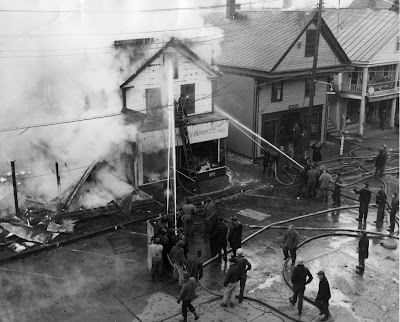 On December 19, 1947, Bradford suffered the "worse disaster on record" as
a fire struck the east side of Main Street's business district (photos: Bradford Historical Society). 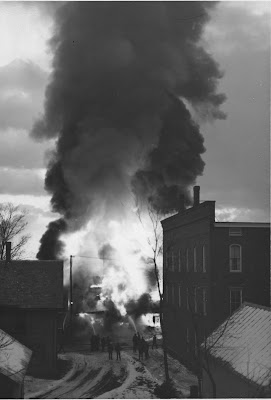 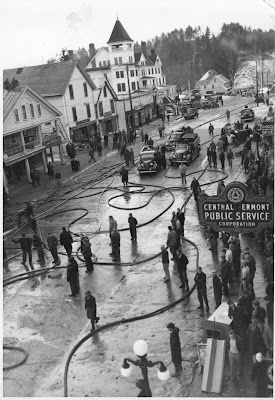 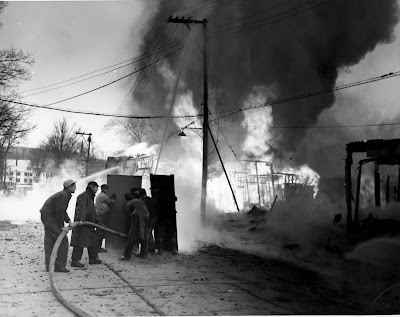 Bradford Fire Company members battled in temperatures that were so cold that the water froze in the hoses.

THIS ESSAY IS JUST ONE OF TWENTY-ONE AVAILABLE IN THE E-BOOK, “IN TIMES PAST, ESSAYS FROM


THE UPPER VALLEY” AVAILABLE ON KINDLE FOR $9.99. PROCEEDS BENEFIT THE BRADFORD PUBLIC

“Down but not out.” That is the phoenix-like attitude that Fairlee residents seems to have adopted following the destruction of the Colby Block this past May. That fire left seven businesses and 10 individuals homeless.

Fairlee joins a long list of area communities that have suffered similar fires over the past one hundred and twenty-five years. Many of those fires were even more devastating as earlier firefighters were often limited to hand extinguishers, bucket brigades and unreliable water supplies. Regardless of the extent of these fires, in most instances, community efforts emerged in the aftermath to focus on regeneration.

The “great conflagration” that destroyed the center of Newbury village on June 14, 1913 was probably the most devastating of any in our area’s history. Beginning in Clark’s blacksmith shop, the fire, fanned by brisk wind from the north, spread quickly to other buildings. The History of Newbury, Vt. states that, “the village was without a water system and totally unprepared to cope with so large a fire.”

The United Opinion coverage of the fire described how “the men fought valiantly but had practically no weapons which were adequate. While men were fighting the fire away from their own homes, they would turn and see these same homes burning fiercely, so rapidly did the fire spread. For a time it appeared as if the entire village might be destroyed.”

The fire destroyed over 25 structures on the Common and along the adjacent streets, some of which had stood for 100 years. Within five hours, the Newbury Seminary, Hale’s Store, the Yellow Boarding House, the Sawyer Boarding House, Bailey-Knight’s Store, the Advent Church and many homes were nothing but smoldering ruins.

It was a “strange freak of the fire” that it burned the brick Newbury Seminary and left the unscathed the wooden Methodist church on its north and Chadwick Hall on the south. Actually, it was the firefighters’ use of horses to draw away the wooden horse sheds from each side of the church that helped to save that structure.

The United Opinion concluded its description of the fire by saying, “New Englanders are not easily discouraged and Newbury is showing itself to be true to its ancestry in this catastrophe.” By August rebuilding had begun. The Opinion’s Newbury weekly columns that fall included descriptions of the progress.

By October, James Hale had rebuilt his store in fire-proof brick. That building now houses the Newbury town office and post office. The new brick school building was nearing completion and homes were being rebuilt in the neighborhood. Plans were also being discussed that would lead to a village water system to preventing reoccurrence of disaster. The local columnist obviously felt that this progress answered the question, “Who says Newbury cannot get a hustle on? “

Bradford suffered the first of three major fires in its commercial district in February, 1883. By the time the fire was under control, 10 buildings were destroyed along the west side of Main Street. The editor of The United Opinion called the fire a “blessing in disguise” because within two years the brick Union and Stevens blocks on the site were build and occupied by a number of businesses. For a complete description of that fire, see the earlier posting on this blog.

Neither the Newbury nor Bradford fires resulted in a loss of life. However, fires such as these strike at the very heart of a village’s economic and social vitality. They are hard to bear regardless of when or where they occur, but a fire that occurs just before Christmas seems especially difficult. It leaves families homeless in winter and businesses without the stock of holiday goods at the height of the shopping season.

Such a fire struck Bradford’s commercial district 60 years ago this month. “Fire Sweeps Bradford In the Worst Disaster on Record” was the headline in The United Opinion on Friday, December 19, 1947, two days after the blaze gutted the downtown. Six businesses including three of Bradford’s grocery stores were wiped out. All five buildings north of the Post Office, now the Colatina Exit, were destroyed, causing a property loss of about $250,000. Two families that occupied apartments in the commercial buildings were left homeless.

The fire apparently broke out about 6:30 a.m. in either the United Opinion office or the adjoining Five and Ten-Cent Store. It went on to destroy those buildings and three grocery stores: Bonneau’s Sanitary Market, the A & P and IGA. Fred Cummings’ clothing store, housed in the Opinion building, was also destroyed. In addition to the buildings, there was considerable loss of inventory.

The family of Gardner Boyd awoke in their second story apartment in the Opinion building to find their rooms filled with smoke and their stairwell blocked. They escaped over the roof to awaiting ladders. The George Barber family fled their apartment over the Sanitary Market as the flames spread to that building.

The Bradford Fire Company quickly responded to the alarm and was aided by the fire departments from neighboring communities. Firefighter Cy Jesseman of the Piermont company recalls that it was so cold the water froze in the hoses. When the Hanover Department arrived, their highly-trained personnel were given charge of the combined efforts. Gary Garone, then 13 years old and on his way to school, remembers that he and fellow students were pressed into service, pulling hoses.

“Down But Not Out” was the other headline in The United Opinion that week. Because its equipment had been lost, the special tabloid-sized edition was printed at the Crowles Press in St. Johnsbury. Local residents agreed with Charles Barton that Bradford’s ability to retain its position as a regional shopping center would depend on rebuilding quickly from the charred ruins.

Within days, Dr. Leonard Abadessa and Barton, owners of most of the destroyed property, had made plans to clear the rubble and put up new fireproof buildings. Katherine Burgess of Bradford, who watched the fire that morning with other employees of the Bradford National Bank, said recently, “I don’t know what we would have done without Charlie Barton. He was a life-saver.”

Helen Bonneau echoed that sentiment in a recent telephone interview. She and her husband Edward had only owned the Sanitary Market for two years prior to its destruction. She recalled that Barton allowed her husband to reopen his market in the basement of Barton’s Chimes Restaurant and later gave him financial assistance as he bought and managed the IGA franchise. This help was especially important as many of Bonneau’s customers took advantage of the fact that his credit records had been lost in the fire.

In March, the voters at the Annual Town Meeting considered giving a tax-break to property destroyed by fire if reconstruction took place. A newspaper account of that meeting reported that the voters were convinced that a “substantial loss of trade “would spread the financial damage to others in the community. There was an appreciation for “the apparent inability of the owners of the destroyed property to replace expeditiously the burned buildings without town backing or town encouragement.” The vote for the tax exemption was 102 to 56.

Shortly, every business that was burned out was back in business. The A & P had moved into a new building Barton built on what is now Barton Street. Bonneau’s IGA and the Five and Ten-Cent Store were doing business in new buildings Barton built on Main Street. The United Opinion and Cummings had relocated to existing buildings. Within a few years, Abadessa erected buildings along the east side that would house a restaurant, movie theatre and a block of stores. There is no doubt that this concerted effort brought Bradford village back from the edge of financial disaster.

The fires that swept Newbury and Bradford would, like Fairlee’s recent disaster, be only chapters in a much larger chronicle of similar area fires. January’s column will cover major fires and the community regeneration efforts in Fairlee, West Fairleee, Topsham, Haverhill and other area communities.
Posted by Larry Coffin at 7:50 AM