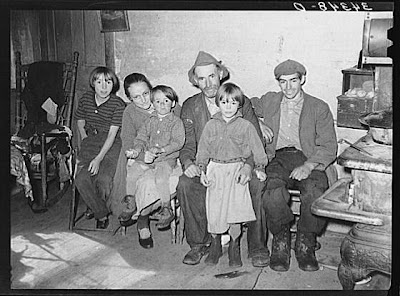 These top three photographs of Bradford area families were taken by the Farm Security Administration photographer. They show the poverty experienced by some rural families during the Great Depression. 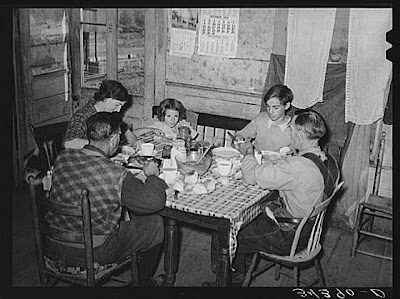 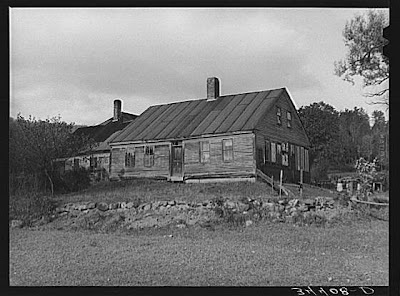 On March 3, 1933 Franklin D. Roosevelt took the oath of office as the nation's newly-elected president. FDR told the nation in his address that "the only thing we have to fear is fear itself." 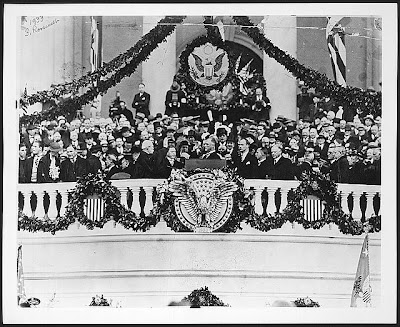 “The only thing we have to fear is fear itself.” President Franklin D. Roosevelt spoke these memorable words of assurance in his first inaugural address delivered seventy-five years ago, March 4, 1933.

The nation was in the grip of an unprecedented economic and psychological depression. In the three years since the Stock Market Crash of 1929, the Exchange had lost 90 percent of its value. Thirteen million people were out of work, an unemployment rate of 25%.

Because many families relied on a single breadwinner, over thirty million Americans had no income whatever. Falling income and prices were accompanied by business failures, bank closings and home foreclosures. Breadlines were common in the nation’s cities. Social unrest threatened capitalism as the basis of the nation’s economy.
But FDR, elected in a landslide over incumbent Herbert Hoover, promised, “a new deal for the American people.” To accomplish that, Roosevelt marshaled the power of the national government to organize the economy. With the partnership of a democratically-controlled Congress, the one hundred days following his inauguration were the most active period of new and often experimental legislation ever experiences. It became the measure against which every new president’s first one hundred days would be compared.
How did these national events impact the residents of our area? When asked by my U. S. History students about the impact of the Great Depression, elders spoke as if with one voice.

“We were poor before and didn’t realize we were in a depression. No one we knew lost money in the Stock Market. Everyone was very poor; they barely had enough to bumble along. Many folks were self-sufficient farmers but we got by with little, as we always had. You couldn’t buy a job! Those who had a job, even for just a dollar a day or room and board, had a sincere resolve to ask for nothing but to be able to pay their own way.”
For many residents it was “hard living in a hard place.” In his book on the history of Vermont’s Republican Party, Samuel Hand wrote, “Some argued that Vermont ‘had simply gone from depression to a worse depression.’ ” The Vermont history Freedom and Unity explained the impact of the depression on Vermont by recounting that the number of industrial wage earners statewide between 1928 and 1933 dropped from 27, 421 to 15,083, with the number of jobless Vermonters reaching 50,000.
Still recovering from the costs of the 1927 flood, Vermont leaders ”displayed little enthusiasm for higher budgets.” A Fair Haven newspaper, quoted locally, included the following: “Especially timely in these days when socialistic theories are stifling individual initiative, are those words of the Governor, in which he says: ‘The people of Vermont are for a government supported by the people rather than a people supported by the government.’ ”

Assistance from the state and federal governments during the first three years of the depression was largely in the form of loans to businesses and work related projects.

Local communities halfheartedly accepted these funds to provide work on area roads. For many, welfare remained locally administered and a disgrace to receive. The Overseer of the Poor was a local position, and his annual report listed for all to see the growing number of individuals who received the “public dole.” The United Opinion called for economy in local government, “to cut the town’s garments to fit the cloth at their disposal.” School budgets were sometimes trimmed, but the amount spent on local welfare increased dramatically.
The newspaper described the plight of area farmers as dairy prices fell to a 25- year low. Despite efforts made to organize New England farmers, many “found their backs against the wall.”

Other articles described local efforts to provide charity, including those of the Red Cross and churches. In Newbury, 60 families received assistance. As one Corinth resident recalled “Everyone helped each other when needed. Our community was pretty close.” But in many Vermont communities, large and small, local efforts were overwhelmed by the depth and length of the depression.
So how did Vermont and the local area respond to the new deal offered by Franklin Roosevelt? “We were Republicans”, was the response to that question when posed to local elders.

Since the party’s inception in 1854, Republicans dominated state politics. Their candidates were elected to every statewide office and dominated both the legislative and judicial branches of state government. The Congressional delegation and Electors of the President were always Republicans. Vermont was “the star that never set” in the Republican Party and would continue to be so until the l970’s.
Orange County Election results for 1932 reflected how entrenched the Republican tradition was. Sixty-nine percent of the votes were for Electors pledged to Republican incumbent Herbert Hoover. By comparison, Hoover received just under 56% of the votes statewide. At the time, each town had one representative in the Vermont House and all but one of the Orange County legislative representatives were Republicans. In area communities, the percentage of Republican votes ranged from a high of almost 72 percent in Corinth to a low of 66% in Topsham, the home of an unsuccessful Democratic candidate for the State Senate. Only one percent of Orange County votes went to the Communist or Socialist candidates.
The first one hundred days following FDR’s inauguration brought an unprecedented number of national reforms and programs. The national bank holiday closed banks across the nation, preventing further panic withdrawals. All banks, including local area banks, remained closed for a short period until checked by the Treasury Department. Emergency scrip became a temporary substitute for cash. For those across the nation who had lost faith in the banking system, reforms and deposit insurance offered assurances.
The Civilian Conservation Corps provided jobs for young men and opened camps in Fairlee, Haverhill and Groton. The Federal Emergency Relief Act provided states with money for both direct relief and unemployment compensation. Additional legislative experiments created jobs in public works projects, refinanced mortgages, provided relief to farmers, encouraged industry recovery, reformed labor laws and moved to end Prohibition.. Summing up the one hundred days, the local editor concluded, “The net result of this radical departure from traditional American policies has, so far, been good rather than evil.” Actually, the opening of several new businesses in Bradford led the editor to write optimistically, “Bradford businessmen have their heads up and their chins out.”
The years that followed brought additional federal programs with varying degrees of success. Historian Henry Sage wrote, “The New Deal suddenly brought millions of average Americans an awareness of government that they had never had before. Government now became a part of people’s daily life.” Many Vermonters were wary of the “federal gravy train” welfare programs, the economic regulations, “make work” jobs and government debt. But the great need, the involvement of state leaders and the precedent set by the federal assistance following the 1927 flood, promoted guarded acceptance.
That acceptance did not translate into political support for Roosevelt in 1936. The United Opinion editorials were critical of the Roosevelt administration and supportive of Alfred Landon, the Republican candidate. FDR was elected in a national landslide to a second term, with only the electors from Vermont and Maine going to the Republican candidate. Republican George Aiken was elected as Governor of Vermont. Orange County Republicans registered an even larger percentage of votes than four years earlier. In Bradford’s record voter turn out, 79 percent went to the Republican electors, the highest of any town in Orange County.
That GOP support would continue in the state and area in FDR’s successful bid for an unprecedented third and fourth terms. As years went by, other programs were introduced. Some, like building projects and Social Security were accepted by locals. Others, like the proposed Green Mountain Parkway, soundly rejected. It was only the economic dynamics of World War II that finally brought full prosperity to the state and nation.
Time and FDR’s war leadership have mellowed the memories of many locals. Again, speaking with one voice, “FDR offered hope and leadership to a nation that had lost hope and sought leadership.” Many felt, “he was the best damn democrat ever in office.”

To sum up the feeling of many, I recall an incident when my wife Carolyn and I visited his memorial in Washington, D.C. We were standing in front of the statue of FDR seated in his wheelchair, his dog Fala by his side. Standing in front of us was an elderly lady with her young companion. I leaned forward and said to her, “They say he saved our country.” She turned and, in a soft English accent, replied, “I don’t know about yours, but he certainly saved mine.” It might be said that he saved both.
Posted by Larry Coffin at 9:02 AM