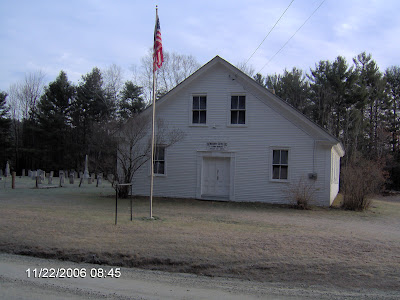 "Equally Inaccessible" Newbury's Old Town House, built in 1838 on Scotch Hollow Road, was near the geographic center of the town. Until 1904, Newbury's town meetings were held in this local community center (photo: Glen Godfrey). 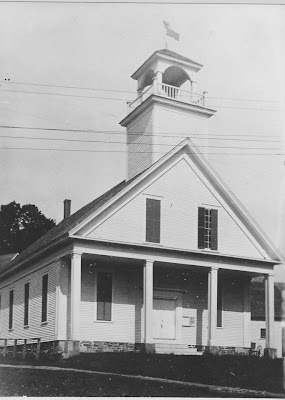 Bradford's old Town Hall was built on South Main Street in 1857. Town meetings were held there until 1936. The hall was destroyed by fire after a thunderstorm in 1945 (photo: Bradford Historical Society). 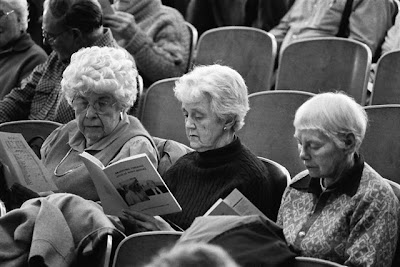 Women were not allowed to vote in Vermont town meetings prior to 1917. We can only guess at what was missed by that exclusion. Pictured at the 1989 Bradford town meeting are Margaret Pratt and sisters Muriel Brainerd and Louise Hutchinson (photo: Tony Dall).

In the next two weeks, local residents will gather for annual town meetings. Officers will be re-elected or replaced, budgets for roads and other operational costs will be decided and numerous articles for the good of the order will be debated. This is a deep- rooted tradition.

UVM Professor Frank Bryan, a native of Newbury, is the leading authority on Vermont town meetings and the author of several books on the subject. In an interview posted on the Internet, Bryan describes this most perfect example of local democracy as, “a legislature of citizens, for citizens, and by citizens.” The first town meetings were held in our local area in the 1760’s. Using information found in local histories, this column deals with the first 125 years of area town meetings. It is during this time that patterns and traditions were established that will be repeated this year.

The first meetings for many area towns were not actually held locally. They were limited to the proprietors to whom the town had been granted and were held as far away as Portsmouth or Bennington. Often land speculators, these proprietors voted on land division and roads to encourage population growth. In Fairlee, Newbury and Haverhill many proprietors actually took up residence. Even after local freemen were allowed to hold regular town meetings, proprietors’ meetings continued to be held. In Newbury these two separate organizations overlapped until 1791. The last proprietors’ meeting in Haverhill was held in 1810.

In the early years only larger landowners were allowed to vote in the town meetings. Since the primary source of income for towns was property taxes, this limitation seemed reasonable. In July 1777, Vermont extended the franchise and opened town meetings to all males twenty-one years or older. The few New Hampshire women of property who had the right to vote lost it in 1784. They did not regaining it until 1878 when the state authorized school suffrage to them. Vermont followed in 1880, allowing the right to vote and hold office in school districts to tax-paying women. It was not until 1917 that Vermont women were allowed to vote in town elections, followed by New Hampshire in 1919. One finds it hard to believe that the lack of a direct vote meant that these women lacked influence in local affairs.

As there was less separation between church and government, churches served as a meeting place for both. When state laws prohibited the use of tax funds for the support of churches, towns began to erect town houses or halls for meetings. In towns such as Haverhill with multiple settlements, the conflict over the placement went on for years. Whether the building should be in the geographic center or the population center, caused major debate.

In Piermont and Groton, the voters called on outside referees from neighboring towns to make an impartial decision. In both cases the referees’ report were rejected and the voters went on debating the issue, sometimes at adjourned meetings that lasted two or more days.

Newbury built its new Town House in 1839 in Newbury Center, isolated but very near the geographic center of the town (see photo). Used for town meetings until 1904, its isolated location was “equally inaccessible to all parts of the town.” Bradford used the town church (now the Old Church Theatre) for most of the 40 years after 1795. Then after meeting for a time in the elementary school, a Town House was built just up South Main in 1857 (see photo). Meetings were held in this building until 1936 when the meetings were moved to the new Bradford Academy auditorium.

Corinth adjourned their July 1845 meeting to the new $700 Town House. In 1850 Fairlee erected a building that served both as town hall and union church until it burned in 1912. After years of accepting and rejecting proposals, Topsham built its present building in 1854 at East Topsham. The next year, and after similar debate, Orford erected its town house in Orfordville. In 1884 Haverhill replaced its older stone building with a town hall in North Haverhill; dedicating it before a crowd of 1000 residents.

One of the most important pieces of business on the agenda of those early meetings was the election of officials. The offices of selectmen, treasurer, clerk and listers were the most important, their functions being similar to those who hold the office in modern times. All towns elected moderators, constables, grand jurors, town agents and overseers of the poor The redundancy of the names of the men who held these positions show both the power of the incumbency and the willingness of some to spend many years serving their communities. James Whitelaw of Ryegate was town clerk for most of the first fifty years of that town. In 1779 Orford had twenty-six different offices filled by seventeen men; all from a population of only seventy-five.

Many earlier offices have disappeared or have been reduced to honorary positions. Hay wards, hog-reeve and pound keepers were elected to police animals, especially strays. The duty of Thying men was to police offenders of the Sabbath. Fence Viewers, “Braanders of Hourses”, Sealer of Weights and Measures, Leather Scalers, Weigher of Coal and Shingles provided dispute resolution for local commerce. To this list Topsham added “culler of hoop poles, staves and headings” as well as “inspector of flour, hops and salt.” Some of these offices were held by up to 10 individuals to cover the various districts of a community.

In several area towns, the positions of tax collector and constable were auctioned off, with the office holder to be paid from fees and percentages of collections. Income was not always what the candidate expected and towns struggled with frequent vacancies and financial proposals.

Once officers were elected, town voters turned to the other warned articles. The amount of money to be raised for the operation of local government was debated, with frugality being significant. Poll and property taxes were debated. Roads were a major issue. When the value of currency was eroded by hyperinflation and counterfeiting, taxes were sometimes paid in wheat or labor. Until 1800 Corinth accepted “salts of lye” in lieu of lawful money.

There was little help for local expenses from state or national governments. However, in 1837 Congress divided a large federal surplus among the states, which in turn, appropriated it to the towns. Faced with this windfall, locals had to decide whether to spend the money immediately or invest the money and use just the interest.

Town pound-keepers were authorized to deal with the problem of stray animals. Fines were levied for loose hogs, rams or other stock that could damage property. Dealing with the poor was a perennial concern. Those for whom the town felt no obligation were warned out of town. Between 1805 and 1811, the Thetford town meeting ordered 58 individuals out of town so that it would not be responsible for their relief. In some towns, the care of the poor was auctioned off to the lowest bidder. Later, towns created poor farms and, in some cases, tramp houses.

Local participation in the nation’s wars brought special concerns. During the months following the outbreak of the American Revolution, the towns took action for their defense. Faced with the possibility of invasion, Orford voted a store of three dozen guns, three barrels of powder, 600 weights of lead and 600 flints. Militiamen were made ready. A 1783 Newbury meeting warned those who supported the British cause of “the Displeasure of the town.” Invasion was again threatened during the War of 1812 and towns responded. Topsham men who were honorably discharged were awarded a bonus in grain or neat stock. Because both this war and the later Mexican War were locally unpopular, some towns passed articles opposing the wars at the same time voting bonuses for local participants.

Support for the Union cause in the Civil War and for the high percentage of local participation, was reflected in the town meetings of 1861-1865. Uniforms, bonuses and family support for local men who helped the town meet its enlistment quotas were authorized. As the war wore on, the size of bonuses was increased as an incentive. In Topsham, the surplus fund was used. In several towns the war effort created debts that took years to reduce.

Towns took stands on such social issues as abolition and temperance. More local, but no less thorny, issues were debated. Whether to remain with New Hampshire or join the new Vermont, was a divisive issue for local New Hampshire towns in the 1780’s. Cemeteries were an annual topic of discussion. One year Corinth refused to purchase tools for digging graves but the next year authorized procuring burial cloths. Piermont purchased a town hearse in 1837 and replaced it in 1862, the cost being covered by the sale of cemetery lots. Some towns supported local fire companies, others did not.

A review of town meeting history finds other unusual activities arising. Prior to the arrival of women, the male only atmosphere was more boisterous and the job of the moderator more difficult prior to the arrival of women. In 1828 Corinth’s Nathan Taplin was fined five dollars for striking Joseph Miles in town meeting. In 1831, Piermont selectmen were instructed not to give licenses to play actors or showmen. In 1860, Bradford voted down an article to annex the town to Caledonia County. In 1864 it also dismissed an article to pay several residents for the time lost while confined during a small pox epidemic. In 1869, Corinth voted six special police to deal with the rowdy miners of Pike Hill.


The French political philosopher Alexis de Tocqueville wrote one of the most insightful analyses of early American society. His work Democracy in America was the result of his 1831 tour. He was amazed at the large number of Americans involved in public affairs. He was especially impressed by New England town meetings. At them, he believed, “democracy makes a more judicious choice than it does elsewhere.” We know from experience that wise and careful decisions are not always the result of town meeting action. But those who support the process believe that over the long run, face-to-face discussions among well-meaning and informed citizens will result in the best decisions for local communities.