The Kelley Portraits: Story of a South Road Bradford Family 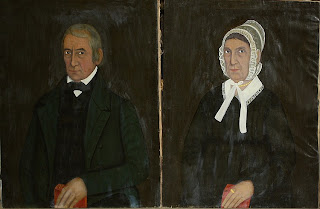 BENJAMIN AND MARY KELLEY
OF BRADFORD BY HARVEY KING GOODWIN, 1852 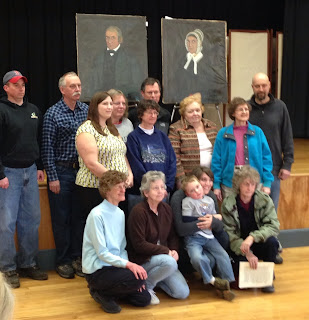 KELLEY DESCENDANTS AT PROGRAM
The Bradford Historical Society, with the assistance of a number of Bradford residents, was able to purchase two 1852 paintings of Benjamin and Mary Horman Kelley by HK Goodwin. On Saturday, April 20 they were unveiled before an audience of about 50. Fourteen of those present were direct descendants of the couple. BHS President Larry Coffin gave the history of both the project and the Kelley-Kidder family in Bradford. Hood Museum curator Barbara MacAdams spoke about the style of painting represented by the portraits. Tunbridge historian Euclid Farnham added information on the painter Harvey King Goodwin.


Money is being collected by the Bradford Historical Society to pay for repairs to the 160-year old paintings. Donations may be sent to Diane Smarro, BHS Treasurer, 854 Goshen Rd., East, Bradford, VT 05033. Some funds have already been donated in memory of Dorothy Cole.

DANIEL KELLEY (b.1747 Newton, NH-d. 1833 Bradford) and MARY WEBSTER (b. 1749-d. 1837 Bradford) This couple came to Bradford about 1797 and occupied land on what is now Kidder Road. He was a carpenter and farmer. Both are buried in the Upper Plain Cemetery. Their children are Mary, William, Mary (named for her deceased older sister), Benjamin (below), Lydia, Daniel, Sally, Joanna. He was a descendant of one of the original settlers of Newbury, MA.

PORTRAIT COUPLE: BENJAMIN KELLEY (b. Sandown, NH 1774- d. Bradford, June 10, 1857) and MARY HORMAN (b. Sandown NH-1774-d. Bradford Feb. 4, 1857). They were married in 1797 and came to Bradford about 1804 and family tradition has it, built the house on Kidder Road. He was a carpenter and farmer. Portraits by Harvey King Goodwin in 1852. They both died in Bradford. She is buried in the Upper Plain Cemetery, he probably is, but no stone can be found. She was a descendant of Hannah Dustin whose historical escape from her Indian captors is well known in New England folklore.

CHILDREN OF PORTRAIT COUPLE: JOSEPH married Chastina Osborne of Piermont. CYNTHIA married Joel Osborne. BENJAMIN JR. (1806-1896) married Anna Bailey of Newbury/Topsham (1805-1898) This couple is the subject of a United Opinion article on 2/14/1896 when they celebrated their 69th anniversary. He was a carpenter, farmer, shoemaker and cooper and made “much sought after” hay rakes. He lived his entire life in the house on Kidder road. Both are buried in the Upper Plain Cemetery. They had 8 children, 30 grandchildren and 16 great grandchildren by the time of their death. His ob said “Few men are permitted to enjoy so long a lease of life and leave so great a record behind them. He was not sick but simply worn out, the machinery of life could hold out no longer. Their children include Mary Ann, James, Philinda (married James Shumway), Anna (married William Moore), Hannah (married James McLane and then Asa Gray, Kimball (married Lydia Barber and is the ancestor of Madeline Messenger), Levina (married David Derby and Sarah (married Hartwell Pillsbury).

Born Tunbridge on Sept. 7, 1823 in the area known as Goodwin Hill the son of James and Dolly Goodwin. In addition to being a farmer he also operated schools of penmanship in Bradford and Danville (in the winter), was a poet and portrait painter and was a preacher without a church…considered eccentric in his manner.

His first wife was Martha C. Stowell (married in 1845 died six years later). They had at least one child, Henry. His second wife Sarah Jane Pellett he met when she was a student at his Bradford school.

In 1861 he joined Company E, 2nd Vermont Infantry as a musician. After the Battle of Savage Station VA, his friend Henry Hayward recalled that he came upon Goodwin sitting beside a tree facing the direction the enemy would come. Hayward said “Harvey, you will be taken prison in five minutes if you don’t move. Goodwin replied that “he did not care whether he was taken prisoner or not.” He was taken prisoner by the Confederates. and died on July 7, 1862 in Libby Prison, Richmond, VA

Much is known about the troubled nature of the man from the transcript of a trial that took place in Salem MA in 1885-86. His son Henry was charged with the murder of Lawrence businessman Albert Swan. Henry’s lawyer former Ma governor Benjamin Franklin Butler raised a plea of insanity, a condition Henry had inherited from his father the portrait painter. Witnesses including six from Tunbridge and his second wife testified about the painter’s troubled nature. His former wife described Harvey as a wife abuser, including threatening her with a knife. Henry was found guilty of murder in the second degree and served 19 years in prison before being pardoned by the Governor.

Posted by Larry Coffin at 7:22 AM No comments: