Armistice Day originally observed the end of fighting in World War I. 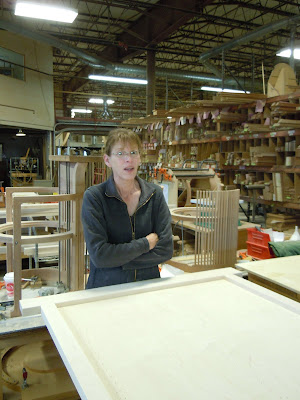 Copeland Furniture employee Carol Brown of Warren had the job of laser engraving
376 names of Bradford veterans on individual pieces of wood. The names were mounted
on three veterans plaques designed by Armin Driver. 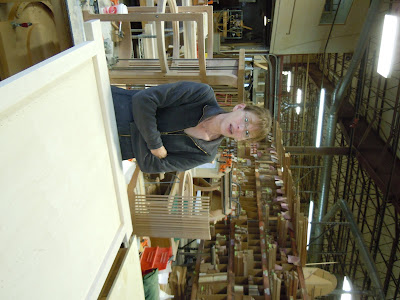 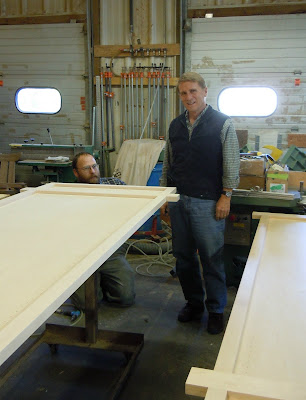 touches on the plaque bases. 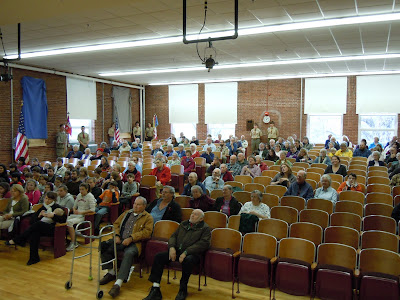 Some of the 150 residents who gathered in the Bradford Academy
Auditorium to share in the dedication of the Veterans plaques. 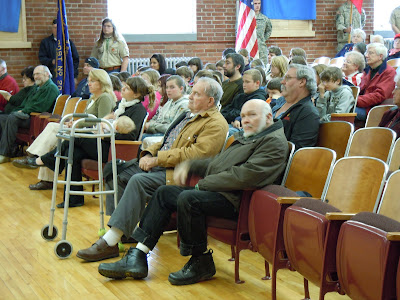 Robert Fish, shown in the end seat of the first row, was the veteran
who called on Larry Coffin and asked that plaques be created honoring
Bradford's veterans. Fish and his two brothers grew up in Bradford and
participated in WW II. 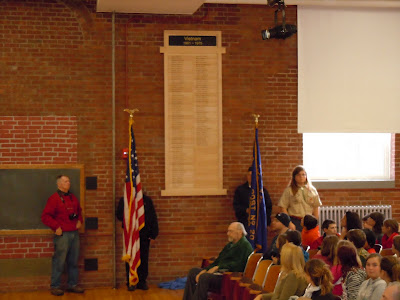 Color guards from American Legion Post #20 are shown with the Vietnam plaque. The Boy Scouts and the National Guard also provided color guards for the other two plaques. 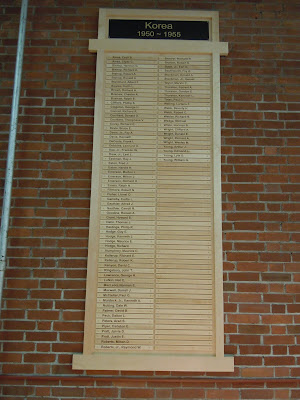 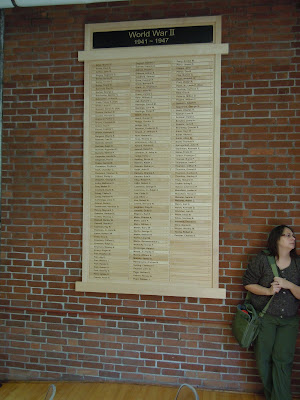 November 9, 2011 as printed in the Journal-Opinion

“In Flanders Fields the poppies blow
Between the crosses row on row,
That mark our place; and in the sky
The larks, still bravely singing, fly
Scarce heard amid the guns below.”

This is the first verse of the famous World War I poem by Canadian Lt. Col. John McCrae. The Great War or the World War, as it was known until World War II, left millions of combatants dead. It began in August 1914 with the Allies, composed of the British Commonwealth, including Canada along with France and Russia against the Central Powers of Germany, Austria-Hungary and Turkey. Modern methods of warfare such as the machine gun, giant cannons, tanks, airplanes, poison gas and trench warfare led to mounting casualties and a stalemate on the Western Front. A generation of young men died in the horror of the trenches with little gain for either side.

The United States entered the conflict in April, 1917 after Germany declared unrestricted submarine warfare on American vessels. Over 4.7 million Americans, including men and women from our area, joined the military service. The American Expeditionary Force, led by General John J. Pershing, tipped the balance in favor of the Allies. An armistice was declared and the fighting came to an end at 11 a.m. November 11, 1918.

The war cost the United States 53,402 battle deaths with an additional 204,000 wounded. Over 63,000 other servicemembers died, many from the influenza pandemic. Many veterans came home suffering from shell shock, now known as post-traumatic stress syndrome. The nation rejoiced on that November day with school closings, church services, factory whistles blowing and spontaneous parades.

Bradford celebrated as people gathered in the streets in front of what is now the Bliss Village Store and “sang songs of joy and praise and thanksgiving, under a great star-spangled banner flying overhead across the street.” In Haverhill, as in other towns, the bells rang all day.

That day and hour became sacred in the memory of the victors. November 11th became known as Armistice Day in the United States and France and Remembrance Day in Canada and Britain. In 1919, President Wilson proclaimed the first Armistice Day anniversary observance.

In 1920, the newly established American Legion Post in Woodsville observed the anniversary with a dinner, concert and dance. Legion There were also Legion Posts in Bradford, Rumney, Lyme and Newbury. Veterans of Foreign Wars Posts were established in Wells River, North Haverhill, Groton, Fairlee and Bradford, some before and some after World War II.

Among their civic activities, these veterans groups sold poppies to raise funds for the needy children of France and for disabled veterans. Selling poppies, reminiscent of the poppies in McCrae’s poem, has become an annual tradition for veterans groups. Communities also used the observance to promote annual Red Cross drives.

In 1921, Armistice Day was declared a national holiday. The most solemn observance that year was the establishment of the Tomb of the Unknown at Arlington Cemetery. The custom of observing moments of silence at 11 a.m. in remembrance of the war dead became widespread. It was during the 1920’s that several local communities, including Fairlee and Bradford, erected monuments to those who had served.

In the 1920s and 30s, most states established Armistice Day as a legal holiday. Because the establishing of legal holidays was a state prerogative, it was not until 1938 that the Federal government made it a legal national holiday.

Only occasionally did local reporters for The United Opinion mentioned Armistice Day observances by schools and veterans organizations. Elders with whom I spoke recall that Memorial Day was more often observed with programs in school than Armistice Day.

In November, 1929, an editorial entitled “Armistice Day Thoughts,” praised the work of the American Legion in support of war veterans and their dependents. As it cited the Legion’s civic programs, it decried the lack of support for ex-service men by of the general public.

In 1935, the Bradford Legion post used the newly-dedicated Academy gym as a location for an Armistice Day dance featuring the Bar X Cowboys and caller George Bedell. By that time it had become an established tradition for stores to close for the holiday. This practice continued for some time, although by the 1950’s only some stores closed for the entire day.

World War II and the Korean War created millions of additional veterans and in the early 1950s, interest in observing a day in their honor grew. In 1953, a special Armistice Day assembly was held at Bradford Academy at which the school was presented with the flag that covered the casket of the late General Herbert T. Johnson of Bradford, former Adjutant General of Vermont. Orators spoke of the meaning of Armistice Day. On that same day, Loyalty Day was observed in the Fairlee elementary school.

In 1954, President Eisenhower signed legislation changing Armistice Day to Veterans Day. In keeping with the theme of honoring all service men and women who have served, special ceremonies were held locally. (Because it is a day honoring all veterans, Veterans Day is spelled without an apostrophe.)

In 1968, the Federal government, as part of the Uniform Monday Holiday Act, moved Veterans Day to the 4th Monday in October. However, when the legislation took affect in 1971, some states began to move the observance back to November 11th. In 1978, with popular support, the Federal holiday observance reverted as well.

Gary Scruton, Past Commander of the Legion Post in Woodsville, told me for some years the post and its auxiliary, joined by the Sons of the American Legion, the Newbury Legion Post and the Haverhill Veterans of Foreign Wars have held a short parade to the veterans monument on Woodsville’s Central Street. The ceremony draws up to 100 participants and spectators depending on the weather and the day of the week on which Veterans Day falls. The veterans groups also sell poppies.

Veteran Leonard Dobbins told me that Veterans Day ceremonies have been held in Bradford for decades. Scott Johnson, Bradford’s American Legion Commander, says since the mid 1990’s, a short Veterans Day observance has been held at the Bradford Gazebo. The American Legion provides a script for the half-hour program. He indicates that up to 40 residents including Scouts usually attend.

In 2010, at a special Veterans Day assembly, Oxbow High School and River Bend Career Center dedicated an honor roll to the students, faculty and staff members who have served in America’s armed forces. The plaque is located next to the flagpole on the front lawn.


This year, as in other years, newspapers will include mentions of Veterans Day in columns and advertisements. Television programs will make note of the day. Some businesses will close and others will offer special deals to service personnel and veterans. Veterans’ groups will hold ceremonies. Concerts, parades and wreath-laying ceremonies will be held across the nation. Flags and poppies will appear. Some will raise a glass to departed comrades.

For the first time since 1918, there will be no World War I veterans in America. Frank Woodruff Buckles pass away in February at age 110. In November, 2008, on the 90th anniversary of the signing of the armistice, he had been recognized by the secretary of the Department of Veterans Affairs as “our last living link” to that Great War.

The observance in Bradford this year was special. On Friday, November 11, at 11 a.m., Bradford dedicated Veterans Honor Rolls for its veterans from World War II, Korea and Vietnam. The ceremony, which took place in the auditorium of the Bradford Academy, was attended by about 150 local residents, including some 6th graders from the Bradford Elementary School. Bradford historian Larry Coffin outlined the history of the project. He said that this project has been underway since l965. At that time, Bradford historian Harold Haskins began compiling a list of World War II veterans. The project then languished until about five years ago. It was again set in motion on a summer evening when elderly Robert Fish arrived at my door.

He said that he was a World War II veteran and had joined the service along with his two brothers. They had all grown up in Bradford. He decried that there was no honor roll listing the names of Bradford veterans. He mentioned the monument that had been placed on Bradford’s Memorial Field in 1965, but noted that it did not include an honor roll. Mr. Fish attended the ceremony./

Scott Johnson, Wayne Kenyon and Larry Coffin took up the challenge. With the help of Copeland Furniture and its staff, and with the approval of the Bradford Selectboard, plaques bearing the names of Bradford veterans will installed on the east wall of the BA Auditorium. The 376 men and women named are those who were residents of Bradford at the time of their induction. It is anticipated that, at some later date, an additional plaque will honor those from Bradford involved in the recent wars in the Middle East.

It took Bradford 56 years to erect an honor roll for those who served in the Civil War, three years for the Great War. As the legions of servicemen and women from World War II, Korea and Vietnam grow old and pass away, it was long past time for Bradford to establish an honor roll to them. Placing this list of names in a most public place will help to honor them, lest we forget their sacrifice.

In November, 1926, The United Opinion featured a retrospective editorial entitled “Back to Plowshares” heralding the return to normalcy in the general population. But it went on to say, normalcy came to “…all except the shattered shell-shocked bodies and the bereft minds and morale of the unfortunate heroes. To them, then, is due all deference and reverence on Armistice Day, the first to respond, yet the most futile to restore and recompense, for an imperishable service.”

For Veterans Day, 2011, with a whole new group of veterans returning from conflict, this is a timely message.

Posted by Larry Coffin at 7:05 AM No comments: