"The Water Came Down From the Hills" 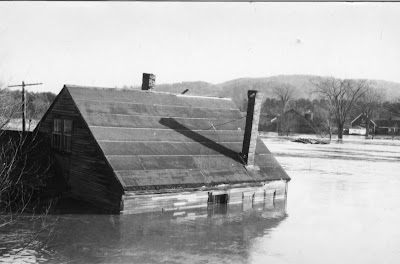 The site of the Bradford-Piermont bridge, swept away on Nov. 4, 1927 (photo:Bradford Historical Society). 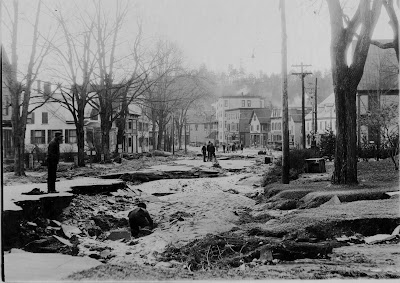 They had occurred in 1869 and 1913 and would occur again in 1936 and l973. In fact, for valley dwellers, they were as perennial as the melting of snow. They were the floods of the rivers that course through our northern hill country. But no flood was more devastating than the flood of 80 years ago, November, 1927.

The conditions were right. It had been a wet fall, with rainfall in the preceding month at 150 percent of normal, saturating the ground and filling the waterways to overflowing. Lumbering and farming activities had left many hillsides bare of the trees that held back the runoff. Many Vermont cities and villages were clustered in narrow valleys, homes and businesses built along the riverbanks.

On Wednesday, November 2, it began to rain. Two storms merged over Quebec and moved slowly south over New England. John Smith of South Newbury recently recalled standing in the front parlor of his family’s farmhouse watching it, “rain and rain and rain, not a cloudburst, just a steady rain for several days.”

It rained through Thursday and into Friday. Some portions of Vermont got 24 hours of rain; in others it rained for 45 hours. Central Vermont got a record-setting 9 inches. With the soil saturated, this deluge had no place to go except into the already full waterways, which quickly overflowed their banks.

Throughout Vermont, rivers rose quickly, some reportedly “rising one-half inch every 60 seconds”, setting new records. People scrambled to save their possessions, livestock and their lives. Some of the greatest destruction of lives and property occurred along the Winooski River from Barre and Montpelier through Waterbury and Bolton. Thirty-two flood- related deaths occurred in those four towns. Along the White River at Bethel, Sharon, Gaysville and Hartford suffered death and devastation.

When the waters receded, the damage state-wide was estimated at over $30,000,000 with 300 homes destroyed and 1,247 damaged. Nine thousand were homeless. Two hundred sixty four factories were wrecked. Six hundred ninety farms were destroyed and 10,000 farm animals lay dead. On many of Vermont’s 32 affected streams and rivers, hydroelectric dams were damaged or ruined. Over 1,200 bridges were damaged or swept away. Thousands of acres of rich farmland and miles of streets and roads were covered with silt.

Damage to the infrastructure of rail and highways brought transportation to a standstill in many parts of the state. Eighty four Vermonters died, including Lt. Governor S. Hollister Jackson, who drowned near his Barre home. Many citizens were left isolated without electricity, mail and food deliveries and in many cases, news.

The greatest damage in our area occurred in the village of Wells River. It is located along the banks of the Connecticut and Wells Rivers, lower in elevation than other area villages. Local historians Horace Symes and Katherine Blaisdell both write about the flood damage in detail. The rapidly rising water of the Wells River caught the village residents by surprise. It was the ringing of the church bell and village alarm system that prevented loss of life as 45 families scrambled to safety.

The Woodsville Times of November 11, 1927 reported the extensive damage to private dwellings and businesses in Wells River. “The river cut a new channel at the north end of the village and came tearing onto main street … where it uprooted the street.” (see photos) Symes explains that the damage was compounded by the collapse of an underground flume that had bisected the main street for over one hundred years, providing waterpower from the Waits to mills along its course. Fourteen buildings were either swept away or damaged beyond repair.

Woodsville had significant damage to buildings on the flood plain and some families had to be rescued from the rising waters. The pavilion on No Man’s Island in the Connecticut was swept away. The railroad bridge between the two villages was saved only by parking a loaded freight train on it for extra weight. As with other railroads throughout the state, there was significant damage to both the Boston and Maine and Montpelier and Wells River railroads.

Damage to other towns in the area was less severe. Reports in the The United Opinion described the destruction of area town roads, bridges, dams and buildings. The Connecticut River rose to 18’ over flood stage at South Newbury, flooding pastures and endangering the covered bridge. John Smith recalled watching farmers rescuing their herds from the South Newbury and Haverhill pastures.

At Newbury Village, the Stone arch on the rail line was destroyed. The stones from this 80-year old landmark were used in the repair of Wells River’s Main Street. In Bradford, the village was plunged into darkness as the Waits River flooded the power station. Piermont was without electricity for eight days. The covered bridge between Piermont and Bradford was swept away (see photo) and deposited on a meadow downstream with little damage.

During the flood the only communication between the state capital and the outside world was via Groton, thought the Topsham Telephone Company at East Corinth to Bradford. On November 5, Bradford resident Fred Brown, a Bell Telephone foreman, repaired that connection while suspended by a cable over the swollen Wells River near Boltonville.

On a somewhat lighter note, Newbury’s John Morris’s Studebaker stalled in the rising water as he was returning from Haverhill. Morris escaped, but the car was swept away. The United Opinion reported that the car was located downstream and asked that anyone who found Morris’ size 12 yellow boots to contact him.

During and after the flood, neighbors and strangers helped those affected. The Red Cross and National Guard were mobilized. Steps were taken to prevent an outbreak of typhoid. Six hundred Dartmouth students descended on White River Jct. to assist in the recovery. Bradford’s Gilbert Cole, a student at Middlebury, worked to dig out the devastated town of Waterbury

In some communities so many were willing to assist in digging out that shovels were in short supply. On November 16th, three trucks left Bradford with 7000 lbs of relief food and clothing. This effort had been organized by the Bradford American Legion Post under the leadership of Bernard Byron, commander. Nelson Bowles and Stanley Curtis accompanied Byron over often damaged back roads to South Royalton and Bethel, where the goods were distributed.

Recovery and restoration continued in the face of unrelenting rain throughout November and the coming of winter. The hardy Vermont spirit prevailed. Governor John Weeks asked for and got federal assistance from President Coolidge, a Vermonter himself. Coolidge appointed Secretary of Commerce Herbert Hoover as his representative to view the damage.

The United Opinion reported Hoover came through the area in an auto driven by Edward Johnson, a former Bradford boy. Transportation and communication were gradually restored. Despite the lasting damage to both natural and human landscapes, life gradually returned to normal. Within the next several decades flood control dams would be constructed to limit the severity of future floods.

The Vermont Historical Society summarizes the lasting impact of the flood in its Freedom and Unity presentation as follows: “The Great Flood of 1927 would change Vermont forever as communities turned to the state, and the state turned to the federal government for assistance.”

Those who are interested in reading additional information will find a number of good sources. The Troubled Roar of the Waters: Vermont in Flood and Recovery, 1927-1931 by Deborah and Nicholas Clifford was recently released and reviewed in the October 19th edition of the Valley News. The Cliffords view the natural disaster within the context of Vermont society and the image that society had nationally. A copy of their book is available at the Bradford Public Library.

Memories of Vermont most devastating natural disaster faded slowly. The following poem was recalled in a VT-ETV video on the flood: “Through the days and the nights, twas the sight of all sights. And it shook us with heart-swelling thrills. And for years it will be told, how the creeks swelled and rolled, when the water came down from the hills.”