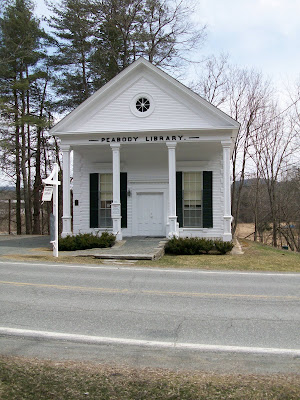 The quaint yet elegant George Peabody Library is named after the famous philantropist who gave it to the village of Post Mills. When it opened in 1867 it was the first building built in the state as a library and featured one of the finest collections in eastern Vermont. 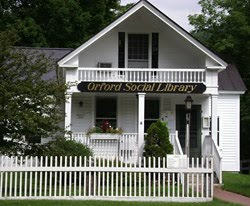 The Orford Social Library is housed in the former Fiefield's Millinery Store built in 1840. Sale of the Orford Academy in 1898 provided the money for the purchase of the library. This is one of the two libraries in Orford that were the origin of a life-long love of libraries for the author. 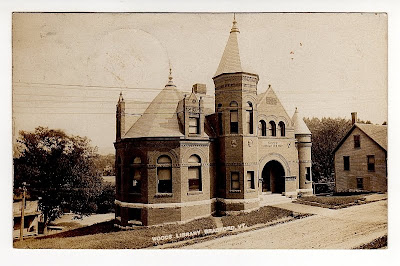 This 1907 post card shows the Woodsville Public Library. One of four libraries in
Haverhill, New Hampshire, it is located in a building donated by Ira Whitcher, local lawyer and businessman. It was completed in 1894.

Tenney Memorial Library, one of two in Newbury, was dedicated on June 10, 1897. It was the gift of Martha Tenney in memory of her father Abner Tenney and stands on the site of the former Spring Hotel.


Journal-Opinion, April 14, 2010
National Library Week is observed April 11-17 this year. It has been sponsored by the American Library Association since 1958. The theme for this year’s observance is Communities Thrive @Your Library. While the theme may be stated in a modern style, the relationship between local communities and libraries is well established. Since the 18th century, libraries have been a vital part of local towns on both sides of the Connecticut River.

The earliest libraries in the British colonies were found at colleges such as Harvard. The Rev. Dr. Thomas Bray brought the idea of local parish libraries to Maryland and the Carolinas around 1700. He envisioned libraries stocked with donated books. In 1731, Benjamin Franklin and others established America’s first subscription library. Members pooled their resources to purchase books from England.

A high percentage of the earliest citizens of the area were literate. Randolph A. Roth states in his book, The Democratic Dilemma that, by the beginning of the 19th century, the Connecticut River Valley “had one of the highest literacy rates in the world.” Approximately 95% of men and 85% of women could read and write. This was due in large part to the Protestant emphasis on individuals being able to read the Bible.

Despite this high level of literacy, families owned few books other than the Bible and other religious works. Books were scarce and expensive. At the time, individuals often measured their affluence by the number of books in their collection. Very early in the area’s settlements individuals came to realize the value of sharing their meager collections. In February 1774, James Whitelaw of Ryegate went to Newburyport, Massachusetts and purchased books for the common use of the residents. Ryegate had perhaps the first circulating library in the state.

In 1796, 34 residents of Bradford petitioned the General Assembly for the incorporation of the Bradford Social Library Society. It was approved by the Vermont legislature meeting in Rutland in November 1796, the first so incorporated. An early social library was chartered in Orford in 1797. In Lyme, a library was established in 1798 with 37 proprietors, each of whom initially paid 50 cents to be a member.

Social or parlor libraries held collections that circulated among share holders. Sometimes others were allowed to access the collection for a subscription fee. The books were kept in a member’s home, a local tavern, church or store. Roth describes how many of the members were “voracious” readers. This interest in libraries was characteristic of the “village enlightenment” of the period which encouraged the study of human culture and the sciences.
There was enough interest in creating local social libraries in Vermont that in November 1800, the legislature enacted a general law incorporating library societies within the state.

There was a succession of social libraries established in Haverhill, the first in 1801. In 1812, the name of this library was changed to the Aurelian Social Library. In 1829, two successors, the South Social Library and the North Social Library were organized. Each of these had a relatively undocumented and short life. In 1845, the desire for a social library led to another being established with a collection of about 250 volumes. All of these libraries included books from local printers and bookstores. This pattern of libraries being established and then gradually disappearing only to be revived years later was normal in many area towns.

The regulations of the Bradford Social Library in the late 1790’s give us some insight into the operation of a library at the time. “Books are to be drawn the last two hours before sunsetting [and] the fine for burning the midnight candle and letting a drop of tallow fall upon the print was four cents, when it fell upon the margin it was two cents. The dire penalty for turning down a leaf was three cents, and until the fines were paid the offender could draw no books.”

One variation on the social library was the athenaeum, the first of which was founded in Boston in 1807. This cultural institution was established to provide a stimulating atmosphere for “the study of the greater works of learning and science.” It did so through the acquisition of books, art and artifacts and by opportunities for lectures and discussion groups. The St. Johnsbury Athenaeum was established in 1871 by Horace Fairbanks. When it opened it was the state’s most costly and well-equipped library.

Locally, some groups established lyceums, a version of the athenaeum without the expansive collection or building. These lecture and discussion groups were popular from the 1830’s through the Civil War and then evolved into the Chautauqua Movement. In 1857, the Bradford Scientific Association was formed and within the next 20 years accumulated, “a cabinet of minerals, specimens of natural history, and various artificial curiosities [and] a good beginning of a valuable library.”

Most of these early libraries were not truly public, with books loaned to the general population. But in 1833, in Peterborough, New Hampshire, the first free public library supported by taxation was established. It was so well received that by 1849 New Hampshire passed a law permitting local governments to appropriate tax funds for the purchase of books and maintenance of public library buildings. It was the first state to pass such a supportive law.

In the next 100 years, public libraries were created in almost every town in our area. They attracted patrons with a larger variety of books, especially novels and children’s books. Gradually all, even those that remained private in ownership, began to receive funds from state and local government sources. They also continue to rely on the generosity of donors, including some rather large donations.

An early and significant donation of $5500 was given to Thetford in 1867 to establish a library in Post Mills. The philanthropist was the successful financier George Peabody whose connection with the community was visits to his grandfather, an early settler of the town. The resulting Peabody Library opened in October, 1867 with 1,100 books, the largest collection in eastern Vermont. Belding writes, the building was, “the earliest in Vermont built specifically as a library.”

Buildings and the collections they contained often experienced destructive fires. Both the Bradford Ladies’ Public Library and the Bradford Scientific Association sustained partial loss of their collections when the building in which they were housed burned in 1883. On December 5, 1912, the Fairlee Public Library was destroyed by fire. When the Piermont library building burned in September 1934, only the books in circulation were saved.

The store housing the Ryegate Library Association’s collection was destroyed in 1941, but the books were saved. In 1942, a fire destroyed Thetford’s Latham Memorial Library. That same year the building housing the Pike Library burned, but most of the books were saved. In 1945, the Romanesque style building housing the Blake Memorial Library in East Corinth burned with the loss of 3,000 books. In all of these cases, communities rallied to replace and enhance buildings and collections.

Men played a dominant role in establishing several of the varied early libraries mentioned above. It was women, however, who kept the movement alive, serving as trustees, steady patrons and librarians. The library in Orford began in the 1870s when Hannah Willard Sanborn solicited books from Orford residents and housed them on the second floor of her father’s main street store. In Bradford in 1874, “new life was breathed into the lagging [library] organization by the contribution of $1 each from 63 women.” As a result the library became the Ladies’ Library Association and continued until 1893. In later years, women’s clubs at both the local and state levels became major contributors to libraries. Many libraries were fortunate to have women who gave decades of service as librarians, often at little or no salary.

In 1894, the Vermont legislature passed a law that encouraged towns without free public libraries to start their own collections with state assistance. After each town appropriated sufficient funds, it received a book collection from the state valued at $100. At the time the secretary of the newly-created Vermont Library Commission reported that there were 27 free libraries and 29 subscription supported libraries in the 245 towns of the state. She reported that the “Library spirit is alive in Vermont,” with an additional 139 communities wanting free libraries.

Fairlee voters at the March, 1895 Town Meeting rejected the 1894 law as being a “needless expense.” But the advocates were persistent and in 1898 the town allotted the sum of $15 to maintain a free public library. The library opened with 103 books from the state and 79 from individuals. By 1907, the collection had outgrown a private home and a vacant schoolhouse was moved to the west side of Main Street to be the town’s library. In 1905, West Fairlee voted to accept the state’s offer of books and establish a library. Only Topsham was left without at least one library within its borders.

Over the years financial support for libraries has become a regular part of town government budgets. In some towns, such as Lyme, the staff members are town employees and governing boards are elected or appointed by the Selectboard. In others, the town allotment is to a private organization that serves as the public library. In towns with multiple libraries, public allotments are shared.

The “Library spirit” is still strong in our area. Margaret Ladd, librarian at the Piermont Library, describes local libraries as “centers of the community.” The current recession has increased the number of patrons. In addition to the traditional services, most libraries now provide internet access, hold programs for both adults and children and circulate audio books and DVDs. Communities do indeed thrive at these local libraries.

No longer are library collections the property of a privileged few. Their evolution in our area supports the philosophy that a democracy’s educated citizenry is enhanced by free access to a community-owned library. If you are a patron of your local library you know what I mean. If you are not, consider visiting your local library during National Library Week and beyond. You will find they are, to use a description by one Piermont patron, “small town perfect.”
Posted by Larry Coffin at 4:49 AM No comments: