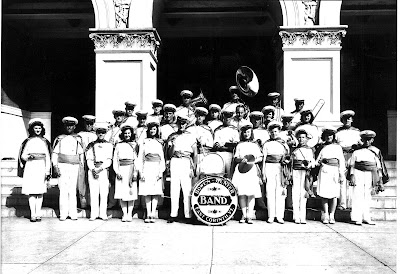 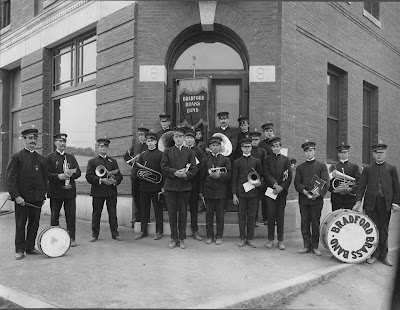 Originally published on July 18, 2007
Journal Opinion
With additional information.
Vermont poet Walter Hard’s “Band Night” evokes the memories of outdoor summer concerts on the village green. He recalls the sounds of brass competing with the laughter of children playing tag and punctuated by the applause of auto horns. Community band concerts have been a fixture of the area’s summer scene since the early 19th century.

Before the advent of the phonograph and the radio, local residents made their own music. Playing a musical instrument was considered a part of the education of many. Traveling musical groups and music teachers enriched the talent of a community. Early in the 19th century, town bands made their appearance in our local area and for two hundred years have enriched its social and cultural life.

The development of militia bands, after the American Revolution, helped to establish a military appearance to local groups and their repertoire. The improvement of musical instruments in the early 19th century led to the forming of many brass or cornet bands. The emergence of a social middle class and community pride encouraged support for bands and public concerts. Band music began to play an important part in local civic events and holiday observances.

Certainly one of the earliest local organized musical groups was the Orford and Piermont Hubbard Music Society formed in 1816. Named for their Dartmouth music director, this group performed the “finished and correct music” of major European composers in area churches and other venues for sixteen years.

Another of the earliest bands was the Bradford Brass Band organized by Jesse Baker with celebrated Boston musician Alonzo Bond as their instructor. In a letter published in the October 22, 1897 edition of the United Opinion, Barron Hay wrote: “I played in a band at Bradford about ten years; we were the military band of the east part of the state. In 1840 there were seventeen of us in the band and we had a four or six horse band wagon and we went all over the state and a part of New Hampshire playing at Whig conventions, “Tippecanoe and Tyler Too’ and cider too.”

Newbury’s Cornet Band was organized around 1857 with Henry W. Bailey and C. H. Clark as their early leaders. On July 4, 1860 they played for over a thousand people at the dedication of the Summit House on Mt. Moosilauke. The Civil War interrupted the activities of many bands, but offered musicians the opportunity to provide music for the troops. The Newbury band reorganized in 1863 with Bailey as their leader and with members from several neighboring towns. It continued until 1886. There was also a Wells River band that played for community celebrations as late as 1912.

The North Haverhill Cornet Band, Haverhill’s earliest, was organized in the late 1850’s by James Ward Sampson, an accomplished musician. According to Haverhill historian Katharine Blaisdell, this band played at various political functions including during voting in the 1860 presidential election.

After the Civil War and through the end of the century, several bands were formed in Haverhill and Woodsville. These included the Woodsville Cornet Band that played not only at its bandstand, but also at the first Bradford Fair. In the 1890’s the Nat Westgate Drum Corps was formed in North Haverhill and gave concerts at the bandstand that stood at the present site of the Civil War monument. The Haverhill Band played a joint concert in 1889 with a band from Piermont. The early 20th century saw the continuation of this musical interest with the formation of the Woodsville Concert Band and its successor, the Woodsville Band.

These local bands were a reflection of a nation-wide enthusiasm for band music. By the end of the 19th century there were over 10,000 community bands across the nation. Vermont Historical Society editor Michael Sherman refers to these bands as “democratic institutions.” He writes that they included both young and older men and because of their “unsavory reputation for teaching their members as much about how to consume strong drink as how to play a cornet,” rarely included women.

Bradford’s bands evolved from one led by Capt. R. E. Whitcomb in the 1870’s and 80’s to the Bradford Militia Co. G. Military Band. This band gave musical programs year round, playing at the bandstand in the park near the library, at their Armory Hall, the Village Hall and at locations around the area. They played for the parade of the Bradford militia as it embarked for the Spanish-American War in 1898. This band apparently evolved into the Bradford Band seen in their military uniforms before the Bradford Bank building in the accompanying 1914 photograph.

Bradford’s David Blakely served as manager for John Philip Sousa, America’s March King, from 1892 to 1896. According to a 1932 United Opinion article written by Blakely’s daughter Pauline Cole, it was Blakely who encouraged Sousa to resign from the Marine Band and create a band of his own. Blakely subsequently helped recruit and organize the famous Sousa Band.

Local lore has suggested that Sousa’s band actually played in Bradford and that unpublished Sousa compositions were left in the Low Mansion, Blakely’s residence. While the Sousas did visit the Blakely home, neither of the other tantalizing items can be substantiated.

The memories of many area residents are enriched by participating in three town bands as well as local high school bands. In 1938, East Corinth businessman Ernest Bowen founded the Bowen-Hunter Band, converting a portion of his garage into a practice room.

This band, composed of Bowen’s bobbin mill employees, their children and other area musicians, continued the tradition of the earlier Corinth Drum Corps. Under the baton of Elmer Dodge this band gave many the opportunity to learn to play a musical instrument. They wore bright yellow and purple uniforms embroidered with a large bobbin. John Pierson and Marie Sweet Chase spoke fondly of their participation in concerts and parades all over Vermont during the 1940’s.
See photo above of that band about 1940 (photo: John/Peggy Pierson).In 1932, George McLure of Littleton organized the McLure’s Student Band and they performed at the Groton Fair. Both through school band practice and individual instruction, McLure created a high school age group that traveled widely. Resplendent in their gold and red uniforms and augmented by a bevy of attractive baton-twirling majorettes, this band was a very popular addition to many local celebrations. They also participated in events in far away places including Washington, New Orleans and Ontario.   Twenty years after its demise in 1968, the director reorganized it as McLure’s Alumni Band, which continues to perform even after McLure death in  1994..

The Bradford Summer Band, lead by Mervil Bruleigh, gave a series of summer concerts beginning in the early 1950’s. Bruleigh, director of the Bradford Academy band, merged students with other area musicians. Early on concert night cars would park along Main Street while crowds gathered on the porch of the Bradford Hotel and on the bank in front of the Low Mansion.

Another popular local band was the Challenger Band led by Marilyn Hodge, music instructor at Haverhill Academy and Consolidated School.  Students from Thetford, Fairlee, Haverhill and Newbury schools presented a number of concerts during both the school year and summer.

The smells of summer in the Village were mingled with those from Frank Frappiea’s popcorn machine. Trumpet players Bruce Stever and Harry Holland and drummer Philip Munson said that the program included Sousa marches as well as the works of other composers and always concluded with “The Stars-Spangled Banner.” These concerts were a staple of summer life in Bradford.

While bands such as the Fairlee Cornet Band are just vague memories, there are those who keep this two hundred year tradition alive today. The Upper Valley Community Band, the Newmont Military Band and the Lyme Town Band make regular appearances in the area. There are summer concert series from Chelsea and Bradford to Haverhill and Lyme. Children still play tag, young lovers cuddle in the twilight of a village green and elders’ feet tap in time with the music. The rituals of summer band concerts continue into a new century.
New information:The United Opinion of August 3, 1934 reported that "Those who wish to may have the pleasure of hearing three band concerts this week. Woodsville and Fairlee band at the band stand Monday evening. Camp Pemigewassett at the Neapolitan stand Tuesday evening and Bradford band at the Neapolitan stand Thursday evening. Does anyone know where the Neapolitan stand was?
Posted by Larry Coffin at 2:18 PM