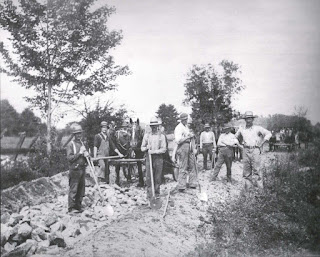 WORKING OUT CONSTRUCTION--old and new. The top photo shows Newbury residents along the North Road working to construct the road. Adjacent landowners were allowed to reduce their property taxes by participating in the "working out" system. (Courtesy-Newbury Historical Society)
The lower photo was taken in  the early 1970s as the new interstate highway was being constructed between Newbury and Ryegate.  Perini Corporation equipment is shown here smoothing lengths of the northbound lanes. (UVM Landscape Change)
Journal Opinion May 4, 2022

Five decades ago, the new interstate highway arrived, opening in Fairlee in 1971, then Bradford in 1972, and eventually East Ryegate in 1974.The impact of this highway has been economically and socially profound. In many ways, the history of towns along its route can be divided as before and after its arrival.

This is not the first time roadways significantly impacted the area. This column reviews the history of local roads from the period of settlement into the 20th century.

The Connecticut River was, for many years, the major road into the area. By water in the summer and on the ice in the winter, settlers arrived with their families. Similarly, they sent their earliest products to market or to be milled.

The first overland roads were “merely passages through the forest,” laid out by traveling indigenous peoples over the centuries. These trodden paths could not be used by wheeled vehicles. Locals used horseback or their own shoulders to carry items. It was in the best interest of the original proprietors to have somewhat improved bridal paths connecting the parts of the town and markets to the south.

In both Bradford and Newbury, it was at least 20 years after settlement before any wheeled vehicle other than an oxcart could traverse these improved paths. Observers described these earliest roads as “very much like winter logging roads” or having “the consistency of porridge.”

Two of the first roads in Vermont were military roads. The Crown Point Road from Fort #4 on the Connecticut River to Fort Ticonderoga on Lake Champlain was built in 1759 during the French and Indian War.  More significant to the local area was the Bayley-Hazen Road.

The idea of a military road from Newbury to St. John’s in French Canada was promoted during the American Revolution by Newbury’s Jacob Bayley. Col. Thomas Johnson of Newbury blazed the 92-mile route in March 1776. With the promise of financial support from General George Washington, construction began in April.  The road was constructed to allow for the passage of wagons and its course kept to the highlands as much as possible.

By mid-June, the road was about 6 miles north of Peacham when Washington changed his mind. Military conditions had changed and it became evident that the enemies could use the road to attack southward. Work stopped immediately. In April 1779, Col Moses Hazen started work again but stopped in late summer northwest of Lowell.

After the war, town committees were appointed “to lay out and make necessary roads.” Local roads began to connect village centers, neighbors and neighbors. Landowners had a stake in the construction of these roads.

Among the earliest were the river roads on each side of the Connecticut. In Newbury, this road was begun in 1773 and later extended to connect Bradford. In Haverhill, the West Side Road connected the town to Bath and Piermont.  In 1774, Orford residents agreed to support building a road to Wentworth.

In 1785, Newbury surveyed a road from Newbury Street over Roger’s Hill to the Corinth line. It was called the “county road” and used until it was discontinued in 1841. In Bradford, South Road was laid out in 1786 and Goshen Road in 1788. In 1794, a road along the north side of the Wells River was marked out, but as with many roads, years passed before it was actually completed.

Roads that could accommodate postal riders and later stage coaches received special attention.  In 1795, the Vermont Legislature ordered the construction of the Connecticut Post Road from the Massachusetts line to connect with the Bayley-Hazen in Wells River.

In 1821, the State legislature provided funds to lay out and construct a stage road from Bradford village through East Corinth to connect to the stage road to Montpelier and Burlington. This road also connected Corinth and Vershire to Chelsea. In towns like Topsham, this was the first major or trunk road.

From 1796 to 1830, turnpikes were constructed in both states. Corporations built 500 miles of toll roads on more than 80 New Hampshire turnpikes. In Vermont, there were 120 turnpikes constructed.

Locally, turnpikes included the Coos Turnpike Road incorporated in 1803. It ran from Haverhill Corner through Piermont and Warren to the Baker River. The Grafton Turnpike Road linked Orford to the Fourth New Hampshire Turnpike in Andover. The Strafford Turnpike connected Norwich through Strafford and Vershire to Chelsea.

Fees were collected at toll gates every few miles. Eventually, as profits dwindled and opposition to fees grew, roads were turned over to the adjacent towns. The history of the Passumpsic Turnpike reflects these trends. Built around 1807, it went from Wells River to Barnet, with eventual connections to St. Johnsbury.  There was growing opposition, especially from Ryegate residents. After 1839, the road was purchased by that town.

In 1823, Vermont Representative Elias Keyes highlighted the value of these new major roads: “The farms and wild lands which they go through or lead to are worth double as much as they would have been without these roads made to travel upon.”

The civil suits arising from accidents on town roads and bridges created similar concerns. One of the most interesting ones was the case of Melendy v. Town of Bradford. In May 1873, Ira Melendy was driving on the Rowell Brook Road that runs from Bradford to West Fairlee.  He ran into a stump that had fallen into the road and was thrown from his wagon and seriously injured.

Melendy sued the town for $20,000 for “alleged insufficiency in a highway in Bradford which it was the duty of the town to keep in a good and sufficient repair.” It took repeated trials in Orange County courts over the next six years to finally result in the plaintiff being awarded $7,668 in damages plus costs. The town had to levy a special tax to raise the $11,000 awarded.

Prior to the late 1890s, maintenance of the roads was mainly “plowing and scraping the soil at the side of the highways into the roadway and roughly shaping it” with little attention to the materials used.

One observer made the following comment about the condition of many roads: “For now it ain’t passable, not even jackassable. And those who would travel it should turn out to gravel it.” Another described it as “neglected, shamefully left to be rutted, deeper and deeper.”

Adjacent landowners were allowed to reduce their highway taxes by participating in the “working out” system during summer construction and winter snowstorms. In New Hampshire, road taxes were levied by the towns based on the district in which the property was located. One of the disadvantages of town control was that adjourning towns might approach road maintenance differently.

In 1892, Vermont implemented a special tax for the improvement of town roads and prohibited the “working out” system. This was the beginning of increased state involvement in highways. Later, there were state taxes on gasoline to meet the increased highway costs.

There were “good roads” movements in both states.  Road improvement was promoted by a coalition of automobile organizations, cycle and tourist groups, and those who needed better roads to get their products to market. In 1892, the Vermont League for Good Roads was established.

In 1898, the State of Vermont began taking steps to control roads through a central state agency with a highway commissioner. Over the next two decades, it gave money to towns for the improvement of their roads and bridges. New Hampshire’s first commissioner was hired in 1915.

In 1904, there was expressed concern about how towns were using the state highway funds with some towns just depositing the appropriation into their general fund.

In 1915 virtually all New Hampshire roads were either gravel or water-bound macadam. Ten years later, less than 30 miles of Vermont’s 15,000 miles of highway were hard-surfaced. The rest were graveled or “in many instances just roads.” Back roads in many communities were “in mostly deplorable condition.”

Paving of some roads began, thus removing the problems of both dust and mud. This generally followed the macadam method of multi-layered roadbeds with a compact base of processed stone to which a layer of tar as added as a binder. In some locations, concrete was used. Oiling of dirt roads tried to eliminate dust. Currently, 55% of Vermont roads are still unpaved.

The federal government role in financing highways got off to a slow start in 1916 because of the World War I. During the two decades that followed aid was increased especially during the New Deal program of the 1930s. The 1921 proposal for a national highway network was rejected.

In 1922, the New England Marking System was adopted. The highway along the Connecticut River was numbered NE 2 in Vermont and NE 10 in New Hampshire.  The system came to an end in 1927, and the current numbers for US Routes 5 and 10 were adopted.

Roads in both states suffered significant damage from floods in 1927 and 1936. Local governments met the challenge with increased spending. This, along with responses from both states and federal governments, actually sped up road improvement. New bridges were built in Piermont-Bradford, Orford-Fairlee, and Lyme-Thetford to replace those destroyed by one of these two floods.

Over the years, many miles of town roads have been abandoned. This led to legal battles as to the routes of the obliterated roads. In 2006, Vermont required towns to find those ancient roads and make them official or have them discontinued.

Historically, whenever transportation slows down or changes in some way, communities are more likely to develop. Horace Symes’ ”Crossroad:  A History of  Wells River, Vermont” refers to that village as “the crossroad.”  Throughout the area, community centers developed wherever there were crossroads. It is there that stores, churches, and taverns were more likely to be established.

Wells River was at the shipping headwaters of the Connecticut. Orford and Haverhill were the terminals of turnpikes. As with the development of major roads, the railroad’s coming caused some communities to prosper while others were bypass, often into near oblivion.

Driving south along Route 5 one can see the signs of areas being bypassed by I-91. Closed motels, gift shops, and other businesses that rely on traffic are evidence.

Currently, crossroads impacts are evident where major highways converge.  At Woodsville, it’s near Routes 10 and 302, while the Lower Plain at Bradford has undergone major changes with Routes 5, 25 and I-91 meeting there. These changes occurred because those roads are the ones chosen by travelers, the roads that actually lead to somewhere.

In 1915, the following appeared in one Vermont newspaper: “The Old Order has changed from the slow going oxcart toiling over the worse kind of roads, to the speedy automobile and motor truck.”  That old order continues to become new. An article on the arrival of I-91 is being planned for the fall.