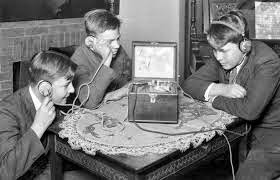 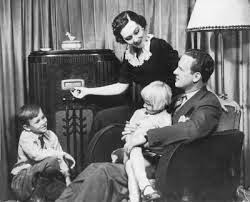 “The discovery of the possibilities of this modern ‘magic carpet’ exerts a powerful stimulative influence upon the imagination which is not easily forgotten.”  Edward L. Nelson. 1925


This statement by Western Electric engineer Edward Nelson reflects the impact of early radio after its introduction to the general public in 1920.  This column deals with the history of local radio and is the first of a two-part series. The second will appear next month and cover television’s introduction locally.  Information was collected from this newspaper and its predecessors, area seniors and radio websites.


Radio was used by military forces before and during World War I with both point-to-point and broadcasting signals.  All amateur and commercial use was prohibited during the war. The armed forces used radio for military communications as well as entertainment for service personnel.  For this reason returning servicemen were among those who recognized the value of radio in civilian life.


In 1919 the government allowed radios to be used for civilian broadcasting.  It is generally recognized that KDKA in Pittsburgh, PA was the first radio station and it began broadcasting in October 1920.  By 1922 there were 600 radio stations across the nation with many of them operated by amateurs with radio telephones. The first radio receivers were crystal sets built from home kits.  In 1924 these were replaced by vacuum tube sets and the earlier earphones were replaced by amplification.


The local columns of The United Opinion carried the news of radio’s introduction in area communities.  Bernard Crafts of Bradford purchased that town’s first radio in 1921. In 1922 Thetford’s column mentioned that Charles Vaughan installed his new radio and brought it to the local church “Sunday evening for the entertainment of those present.”  In East Corinth, A. C. Jackman “recently installed a radio and can now listen to concerts, etc., as far west as Davenport, Iowa.”


That same year the Dodd and Slack boys of Newbury “successfully listened to a concert and prize fight.”  In South Newbury, a crowd gathered at one home to hear a concert “distinctly from Schenectady.”  In Wells River, Wendell Clark had a “radio phone” and Haverhill’s Ralph Simpson had a radio to share lectures, concerts and baseball scores “through the air.”


Vermont’s first radio station was a project of UVM’s Radio Club.  It operated an amateur station beginning in 1921. That station received a license as WCAX and went on the air on October 10, 1924 and remained nonprofit until it was purchased by the Burlington Daily News in 1931. New Hampshire’s first radio station went on the air in August 1922. It was Laconia’s WKAV, a station that changed its call letters to WLNH in 1934 after a brief shutdown.


The 1930s have been described as “the golden age of radio.”  The radio became a centerpiece of furniture for millions of families.  Despite fears that “playing with the radio” was a serious distraction, car radios became a standard feature in automobiles. Battery-powered radios allowed them to go almost everywhere.


By 1934 there were 583 radio stations nationwide and 60 percent of households had radios. Radio used its broadcast potential to bring the nation together in new ways with both common listening experiences and mass marketing.


Many rural locations did not have electricity and if families could actually afford a radio it had to be battery operated.  One West Topsham resident recalled that the 6-volt battery that powered his family radio was actually recharged by a windmill.


Those interviewed recalled listening to shows such as “The Lone Ranger,” “The Shadow” , Edgar Bergen, Kate Smith, Jack Benny and “Fibber McGee and Molly.” Soap opera such as “One Man’s Family” joined radio drama, news broadcasts, comedy, variety and quiz shows. Individual stations and networks featured musical programming in every genre from opera to country. Families rearranged their schedules to listen to favorite programs.


Many of those interviewed recalled the newsflash that interrupted regular programming on Sunday afternoon, December 7, 1941 or the announcement of the death of President Franklin Roosevelt in April 1945.  By that time 95 percent of all homes had radios.


During the 1930s and 40s, The United Opinion included the syndicated gossip column “Star Dust” written by Virginia Vale. It included news of radio and film personalities and notices of upcoming programs. The newspaper also reported other radio happenings including WDEV’s 1939 Bradford Community Program sponsored by local businesses.


Presidents made use of the radio to communicate with the American public.  In 1924 Calvin Coolidge gave the first address specifically written for radio.  Franklin Roosevelt used radio broadcasts from 1933 to 1944 to offer reassurance to a nation in the grips of the Great Depression and World War II.  Locals remembers these “fireside chats.”  Harry Truman continued national radio broadcasts into the post-war era.


One of the most popular stations in Vermont is Waterbury’s WDEV. It began broadcasting on July 16, 1931 at 550 AM on the dial. The next day’s edition of The United Opinion carried an editorial of congratulation for the new station, calling the inauguration “one of the outstanding events of the year in Vermont.”  It specifically cited station owner Harry Whitehill “for his initiative in successfully launching a station in the smallest village in New England to have such a modern touch for dissemination of information and entertainment.”


In October 2013 WDEV President Ken Squier spoke about the history of the station to a Bradford audience.  He said that Whitehill owned several newspapers in Vermont and, knowing that “more people can hear than read,” envisioned a local and relevant newspaper on the air.  His assistant was Lloyd Squier, known on the radio as “The Old Squier.”


Many local elders listed this station first when asked what station they listened to as youngsters. Cows were milked to the sounds of WDEV playing on barn radios and local basketball games were broadcast from local gymnasiums. Many recall listening to Boston sports broadcasts.


The music of Don Fields and His Pony Boys was especially popular. WDEV is also remembered for its coverage of auto racing, “The Trading Post” program and “Music To Go To The Dump By.” The station has been cited as one of the nation’s best example of independent radio broadcasting.


Boston is New England’s central city and its radio station WBZ had a strong presence among listeners throughout the region. The station began broadcasting on Sept. 19, 1921 from the Eastern States Exposition in West  Springfield, Massachusetts and relocated to Boston in 1924.  Its programming included reports of Boston Bruins and Boston Braves ball games and in March 1925 it broadcast the presidential inauguration of Calvin Coolidge.  In 1926 it became an NBC affiliate.


Growing up in Orofrd, I shared a bedroom with three brothers.  My two older ones controlled our single bedroom radio. They liked country tunes and so, like many locally, we listened to WWVA’s Jamboree from Wheeling, West Virginia nightly. The station went on the air in 1926 and by the early 1950s it broadcast 24 hours a day with 50,000 watts on 1170 AM. As many local stations went off the air at sundown, this station had a strong night time signal that reached the Northeast.


The station alternated evening programs of dance tunes with “cowboy music.”  It was the latter we listened to. Lee Moore was the DJ we remembered and performers such as Hawkshaw Hawkins and Doc Williams and the Border Riders were among the many that joined the broadcast. Doc Willams brought his national tour to the local area several times.


On October 3, 1975 local residents flipping the radio dial heard a new station broadcasting from the old school building in Wells River.  It was the beginning of a long-standing affair between WYKR and the listening public of the North Country.  Early morning listeners became accustomed to the Yankee twang of owner Gene Puffer as the station offered birthday greetings, lost and found notices, a calendar of local events, interviews with local personalities and country music.


Puffer had an image of what a community radio station was and WYKR became that for many. “It can’t be faked” he said and it wasn’t.  Radio personalities included Gerry Brooks and Stephen John Puffer, who were too many “like a member of the family.” While waiting at the station for an on-air interview I asked Clara Puffer how Gene knew how to pronounce unfamiliar names.  She said that he listened to the news the night before in hopes of getting the correct pronunciation.


In February 1982 the Journal Opinion ran an article about the station entitled “A Bit of Nashville in Wells River.”  The station had dropped other music formats to go 100 percent country in response to the community interests.  In 1990 the station received an FM license. The AM broadcast continued as WTWN ll00 with a Christian family-oriented programming.  The station moved to its present location on Route 302 in 1998. This past November Gene Puffer passed away. His station continues to broadcast, a testimony to his love of radio and community.


Undoubtedly many who read this column will not find their favorite radio stations mentioned. Those may be commercial stations such as WSNY Albany-Schenectady that originated in 1942, WTSL  broadcasting from Lebanon beginning in 1950 or Mt. Washington’s WHOM that went on the air as WMTW in 1958. There are the listener-supported stations such as Vermont Public Radio, established in 1977, and New Hampshire Public Radio that began broadcasting in 1981.


The advent of television put a great deal of pressure on traditional radio stations.  Most programming was dropped in favor of just music, talk and news. Today satellite radio and webcasting on the Internet has changed what it means to be a radio station, especially a regional one.


Despite the changes, those who enjoyed old-time radio recall that traditional programs did something that television cannot do well. The script and the accompanying image-inspiring sound effects caused the listener’s boundless imagination to run wild.


I will always remember the advertisement for radio that invited the listener to mentally visualize the following: “Let’s fill Lake Michigan with hot chocolate. Now signal a plane to drop a 700-ft pile of whipped cream topped with a 10-ton cherry, all to the cheers of thousands of spectators.” Sound effects were added.  When the listener’s imagination was fully involved in this unlikely scenario, the announcer finished with “Now let’s see television do that!”