On Tuesday, August 12, 2009 the Bradford Historical Society held a "home-grown" program featuring poems and pieces selected by its members. The program was orchestrated by Board members Martina Stever and Jannette Nordham. The general public was invited to share their favorite poems , with special emphasis on local poets. Seventeen inidividuals participated. If there was a somewhat common theme in the poems shared it was the beauty of the rivers, hills and mountains of our locale. Changes in the human landscape was also a theme. 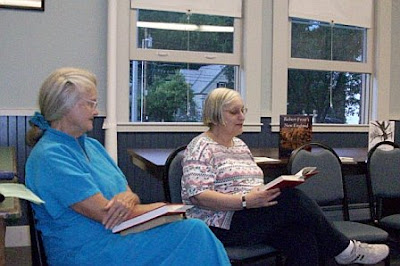 Jeannette Nordham (left) shared several poems by Emily Page who grew up Bradford at her grandparent's home near the Bradford-Piermont bridge. She also read a poem by Rev. Alfred Hough "a prolific and versatile writer" who served as the Methodist minister in Bradford from 1887-89. BHS Curator Karen DeRosa (right) read a portion of a poem by George Divoll, a former Bradford resident who wrote about the Connecticut River. 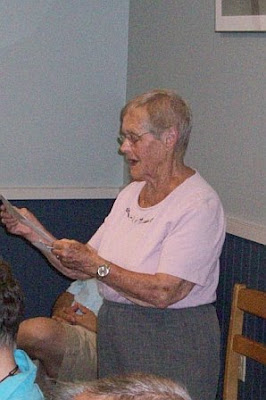 Board member Phyllis Lavelle read selections from two poets. The first was Elizabeth Aker Allen who was described as "a competent, graceful, minor poet and one of the cleverest fashioners of light verse of her time." The poet Ella Wheeler Wilcox. the daughter of a Bradford resident, is best well known for a single line from her poem "Solitude": "Laugh and the world laughs with you, weep and you weep alone." 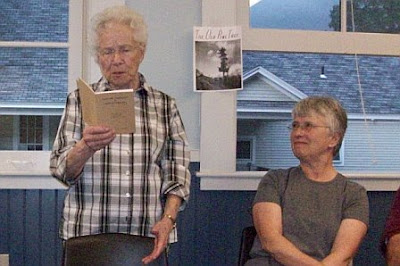 One of the highlights of the evening was a reading by Kay Darling Brown Martin, the sister of Bardford poet Donald Darling. "When I Went Away to School" was written by Mr. Darling about a "lesson" he learned as a freshman at St. Johnsbury Academy: "Don't blow out a toilet drain with a teacher on the stool." Mrs. Martin's delivery, complete with a twinkle in her eyes was delightful.

Just Before Christmas." He had memorized the poem as a freshman at Bradford Academy some years ago. Mary Sanborn recited two poems by her husband Bill and one by Sarah Hope Amundson. Wayne Kenyon recited a poem entitled "The Old Pine Tree" written by his father Charles A. Kenyon. A picture of that tree can be seen in the photo above.

Sheila Kaplow and Louise Sanberg both read poems they had written. Martina Stever read a poem by Thelma Belair and one by Patrick Creamer. Patrick was in Martina's 5th grade at Bradford Elementary School in 1988 and his poem won first honors in the state-wide Creative Writing Contest. Larry Coffin read a poem by Dorothy Parker Huden and one by Daniel Cady.
Eugenia Stevenson read a short unpublished poem by Helen Carr of Bradford about majestic Mount Moosilauke.

I have chosen two poems by Bradford poets, one older, one modern. The first will be portions of "The Old Bridge"was by Emily R. Page who lived with her grandparents next to the toll bridge between Piermont and Bradford c. 1850's. The second is by a modern poet Sheila Kaplow and is one of the poems she presented at the reading.

Bowered at either arching entrance

By the wilderness of leaves;

And the brown and mossy eves,

Is the dear old bridge, which often,

Often in the olden times,

Echoed to our infant footfalls,

And our voice's ringing chime.

(Last verse) With the sunlight round about me

Bright and glad as long ago,

And the river down beneath me,

With its soft, continuous flow,

With the old familiar places,

All about me everywhere,

Come against the pleasant faces

That made the earth so bight and fair;

And, as then, each passing cloudlet

Seems to wear a golden edge,

As I muse within the shadow

Falling from the dear old bridge.

I don't want to skype or to twitter or "friend"

(the use of that verb makes my hair stand on end)

I bristle and scowl at the sound of a tweet

and the language I use is too crude to repeat

that's all for the birds or for kids for that matter

I do employ e-mail for sending a letter

but my typing is rotten, my prose not much better

and my eyes go all wobby for watching that screen

which makes me so tired that I get somewhat mean

and send awful things that I never would say

for which both my pride and my conscience must pay.

I do use the phone if the number is handy

'cos hearing the voice of a friend (noun) is dandy

a cell phone is useful when struck fast in traffic

I do click on Google for facts if I must

and Britannica's volumes are gathering dust

getting info is one thing, but I want to talk