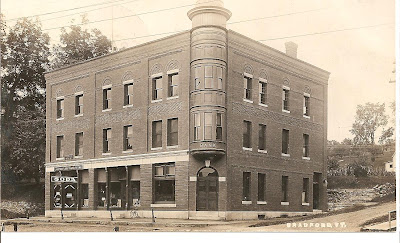 The Armory of the Bradford Guard occupied the third floor of this bank building on Main Street, Bradford. It was dedicated in February, 1892. 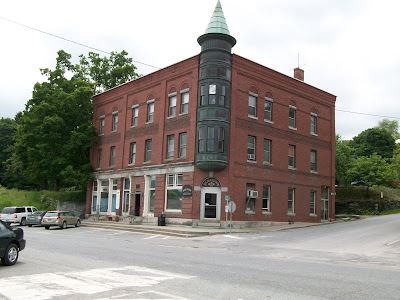 Now on the National Register, the Richardson Building houses the Blue Wave Tae Kwon DO in the restored hall on the third floor. The hall, pictured below, was restored by members of Blue Wave in 2005. 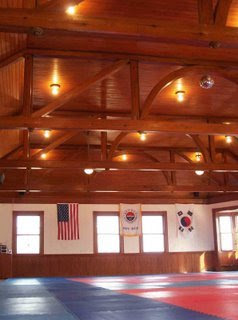 
On February 23, 1892 the new Bradford Armory was dedicated. It was located on the third floor of the Bradford Saving Bank & Trust Co. building on Main Street, Bradford, Vermont.
The occasion for the dedicated of this new facility was the 10th Annual School for Officers for the Vermont State Militia. The armory was described by the local paper as "the finest to be found in the State." It consisted of a 40' x 70' drill room with five trusses, sealed in natural wood. The hall had a small stage at the north end. There was a 20' x20' company room to the west and a uniform room on the south.

The brick building was new, having replaced the wooden building that housed the Prichard & Hay Store that had moved to the new brick Union block. "The building itself is one of the most substantial and modern structures in this section of the State." stated The United Opinion editor.

The armory had previously been located in a building owned by George Brown and located just behind the brick store on South Main Street (now the American Legion building.)

In addition to the armory and bank the building housed several stores on the first floor and offices on the second. Over the years, those facilities were used by a variety of offices for lawyers, dentists and other businesses as well as a variety of stores. The Bradford National Bank took over the banking facilities in 1904 and remained there until it moved to its new facilities in 1962. That first floor space was used as the Bradford Town Office until 1972 and followed by a short-lived cafe and then insurance offices. In the 1970's the building was placed on the National Register as part of the Bradford Village Historic District.

Over the years the third-floor hall was used for basketball games and dances as well as the center of militia, later National Guard, activities. The Guard moved to th Union Block (Perry's building) before moving to the new armory on Fairground Road in 1959. Gary Moore recalls that the Bradford Pistol and Rifle Club used the space after the Guards left, before also moving too the new armory.

A ticket booth was located at the bottom of the stairs to the third floor, sharing space with the "water closet". After being used briefly as a dance studio and teen center, the hall was subdivided into offices for an accounting firm and the Orange East Supervisory District offices.
In November, 2005 the Bradford Blue Wave Tae Kwon DO moved its headquarters to the third floor space. The members under the leadership of head instructor Bob Kline had accomplished a complete renovations of the facility. Office walls and a false ceiling have been removed. Original woodwork and metal wall coverings were replace or restored.
On May 9, 2009, the Bradford Historical Society held a meeting in the renovated hall. Marty Emerson and Bob Kline of the Blue Wave group shared photos of the renovation efforts. Other area residents shared memories of the building's long history. Sargent Harry Harrington of the Vermont National Guard spoke briefly, stating that the armory was the oldest of a series of armories built at the time.
The old Armory has taken on a new life. On warm summer evening, pedestrians on the sidewalks of Bradford can hear the buzz of activity emanating from the third floor. Kline recently repeated his interest in reconditioning the floor with the hope of having dances in the hall. Like the hall itself the old ticket booth may yet have a new life.
Posted by Larry Coffin at 7:17 AM