Orford-Fairlee's Samuel Morey had over 20 patents and worked on perhaps 4,000 inventions during his lifetime. He is described as an "inventor extraordinary." 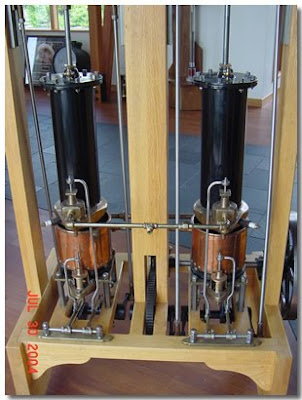 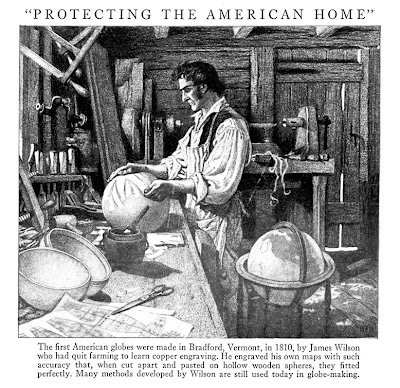 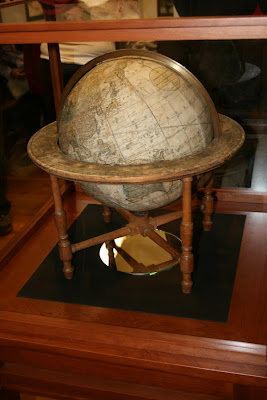 In 1810 James Wilson of Bradford sold the first of his American-made globes. The Bradford Historical Society recently undertook the conservation of their first-year globe. It is pictured above in a new cabinet manufactured and donated by Copeland Furniture.


As published in the January 13, 2010 edition of the Journal-Opinion.

In 1790 George Washington signed into law a bill that laid the foundation for the American patent system, a system establishing the legal right of an inventor to profit from his invention. It encouraged Americans to become prolific inventors. The very first patent was granted to Samuel Hopkins of Pittsford, Vermont for an improvement in the manufacture of potash. By 1836 the U.S. Patent Office had registered 10,000 new inventions and innovations. Others were unregistered.

Residents of our area were among those individuals who found new ways to solve old problems, to improve some aspect of life. They had in common the traits of inquisitiveness, ingenuity, patience and an aptitude for tinkering. Many inventions came only after years of unsuccessful attempts and often by accident. Some were the result of “making-do,” the byproduct of a thrifty lifestyle. The system sometimes gave the inventor financial rewards and public acclaim. Others went unheralded because they failed to have patents registered or they were too far ahead of their time for public acceptance.

The most extraordinary inventor from the area was Samuel Morey of Orford and Fairlee.
His story is well documented by Alice Hodgson who lived in the Morey house on the Ridge in Orford for many years. Lance Mills of Fairlee has written an informative unpublished manuscript entitled: “Samuel Morey: A Life of Invention.” It is designed to introduce young readers to this visionary.

Morey was born in Hebron Connecticut in 1762 and moved at the age of three with his family to Orford. His father Israel Morey became a leader of the new community. In 1793, Samuel received his first patent for a steam spit designed to relieve cooks of the tedium of turning roasts over an open fire. It was the first patent granted to a New Hampshire inventor.

At about the same time he ran his first experimental steam boat on the Connecticut River between Orford and Fairlee. It was a log dugout with a paddle wheel at the prow. In 1796 he wrote, “When my arrangements are sufficiently matured for exhibition, I went to New York and built a boat, and during three successive summers tried many experiments in modifying the engine and in propelling.” But his experiments were unsuccessful and in 1800 he returned to Orford defeated and burdened by both debt and illness in his family. He was able to recover financially by selling the rights to his steam spit and a new steam engine.

At this point Chancellor Robert Livingston of New York offered Morey $7,000 for the patent rights to his steamboat. No bargain was made. Morey continued to consult with Livingston about improvements he made in his steam boat. But Livingston backed Robert Fulton who was eventually credited with operating the first commercially successful steamboat. To the end of his life, Morey felt the injustice of Fulton’s actions, saying, “Blast his belly! He stole my patent!” It was not Morey’s steam engine Fulton had copied, but his unpatented steam powered side paddle wheels which Fulton “appropriated.”

Despite this failure Morey was not deterred. In 1817 he took out a patent for an invention he called the American Water Burner. This was the result of his experiments with the interaction of heated carbon and steam. “His fellow townsmen, hearing that he was attempting to burn water, believed he had finally taken leave of his senses.” His house on the Ridge had the distinction of being heated and lighted by water-gas half a century before it was successfully used around the nation for heating and illumination.

Morey’s workshop was the,”scene of innumerable extraordinary experiments,” perhaps as many as 4,000. He patented over twenty inventions including those dealing with steam and mixing combustible substances. His revolving steam engine was commercially successful.

While he is most widely known locally for his steam boat, it was the invention of the first internal combustion engine for which he is most well known. He received a patent for it in 1826. Mills writes, “in addition to a carburetor, this engine had pistons, valves and a crankshaft.” While it was decades ahead of its time, Morey correctly prophesied that it would “greatly change the commercial and personal intercourse of the Country…there will be little use of horses for that purpose.” Charles Duryea, producer of America’s first recognized automobile in 1891-92 gave Morey credit for inventing the internal combustion engine.

In 1832 he moved to Fairlee where he owned considerable land around Fairlee Pond, later renamed in his honor. He tried his internal combustion engine on the Aunt Sally, a boat he operated on the pond. A year later he received his last patent for a method of “decomposing and recomposing water, in combustion with spirits of turpentine.” As hydrogen is developed as a fuel of the future, some credit may go to Samuel Morey, the Thomas Edison of his times. He died in 1843.

Bradford’s James Wilson, America’s first globe maker was born in Londonderry, N. H. in 1763. His early interest in globes, all of which were made in Europe at the time, was heightened by a visit to Dartmouth College where he saw several globes.. He moved to Bradford in 1795 and earned his living as a farmer and blacksmith. Resolved to make a globe that was practical, portable and more importantly, saleable, he began a fourteen year quest.

He produced his first globe in 1796. It was just a paper covered wooden ball with hand drawn maps. Its crudeness did not deter him. He sold some cattle to buy a set of Encyclopedia Britannica from a seller in Ryegate and using it strengthened his primary school education in geography, astronomy and natural science. He possessed a quick mind, knew the importance of discovery and excellence and realized the need to learn from others.

He walked to both Massachusetts and Connecticut to consult with master engravers to gain the art of engraving on copper. To overcome the problems of printing maps on a spherical surface in true proportions he sought help from Jedediah Morse in Charlestown, Massachusetts.

After fourteen years of experimentation and creating the necessary presses, lathes and other tools, inks, glues and vanishes, he produced the first saleable globe. He handcrafted the wooden stand and brass engraved meridian ring to hold the globe in place. His thirteen-inch terrestrial globe consisted of two sewn-halves of papier-mache skim coated with plaster and covered with a paper map. The map contains twelve-wedge-shaped sections hand-tinted with watercolors. They were “in all respects fitted to rival in the market any imported from foreign countries.”

While there may have been earlier sales, the first recorded sale took place on January 18, 1810. The demand for his globes was considerable. His blacksmith shop became a globe factory as the market grew. Around 1815, Wilson and his three sons moved their globe manufacturing to Albany to be closer to the markets. As the years went by the selection of globes was expanded to include celestial and terrestrial globes of different sizes, often sold in pairs and improvements were made in the details. They were sold for about $18 in 1816 and offered for up to $55 per pair in 1827. In 1827 he brought his globes to Washington to display to Congress. Three of his globes are now on display at the Library of Congress.

Wilson considered Bradford his home and returned often to a new brick residence on the Upper Plain. The business remained under the control of the family until after 1835. During that time Wilson globes were widely used and eclipsed the foreign imports.
One time Wilson was traveling by stagecoach with one of his globes in his lap. A fellow passenger, an Englishman, was touting the advantages of English made items. “Look at that beautiful instrument” he said, pointing to the globe. “Of course, it is impossible to make such a thing in this country.” Wilson turned the globe to the printed name and read “Jas Wilson & Sons, Albany, N.Y.” The Englishman was shamed to silence.

At the age of 88 Wilson built a planetarium that showed the movements of the sun, moon and planets. He died at the age of 92. On January 17, 2010, the Bradford Historical Society will celebrate the bicentennial of the invention of the first American-made globe by Bradford’s James Wilson. The ceremony will feature the presentation of a first-year globe that the Society has had repaired and preserved by the Williamstown (Massachusetts) Art Conservation Center.

Many of these innovations did not bring about revolutionary changes in established industries but rather incremental improvements. To quote Steward Holbrook: “For a century [after 1790] Yankees were to stand in the very front rank of American inventors, both in number and in the wide influence of their work.”

Since 1790, the U. S. Patent Office has granted over seven million patents of which 185,244 patents were granted in 2008. One half of the patents granted in 2008 were granted to Americans and the remainder to inventors from all other nations. The percentage of foreign inventors granted American patents has increased significantly over the past fifty years.

Are area inventors a thing of the past? Have they and America lost its edge in the world of inventions? I posed these questions to Norman Etkind of InventVermont, a non-profit organization that encourages inventors. He responded: “Yankee ingenuity is as much a part of Vermont as the Green Mountains. It is a feature of the collective personality of the state and is as alive today as it ever was. America is unique among the nations in the way we constantly strive to improve upon our current condition and the way that all people, not just big companies participate in this quest.”

Dartmouth College, Dartmouth Medical School and Dartmouth-Hitchcock Medical Center and the businesses that have grown up around them are the invention incubator for the Upper Valley. Many of the men and women employed there live in our area and their innovative influences reaches out to the world. According to Glennis Gold of Dartmouth’s Technology Transfer Office over the past 15 years scores of inventions and innovations have been created in fields such as word processing, engineering, biotechnology, medical devices and life science.

The term invention comes from the verb to find. We celebrate the ingenuity of area inventors, past and present. They continue to change and in most cases improve our lives. It is to our advantage to have Americans, including those in our area, continue to be inquisitive, to tinker, to experiment and to find.
Posted by Larry Coffin at 7:43 AM