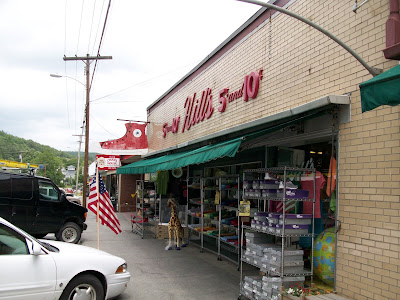 In 1959 Edward Wendell Sr. and Charlie Hill opened Hill's Five and Ten on Main Street in Bradford. The building was owned by Charles Barton who built it in 1947 to replace a building that had been destroyed by fire. In the 1970's Ed and his wife Gloria bought out Charlie Hill's share and subsequently purchased the building.

For 50 years this department store has served four generations of shoppers. Those who gathered to celebrate the anniversary agreed that shoppers could, over the years, find many needed items on its shelves. Up until 50 years ago, the stores on Bradford's Main Street were open on Saturday night. In May, 1959 they began remaining open on Friday night instead.

Since 1996 the store has been run by Wendell's son Ed and his wife Mary. In a brief history of the store, Ed wrote: "What has always been a challenging business gets more so all the time. With only a handful of stores like this left, buying locally has never been more important than it is today. We encourage people to support local businesses when they can." 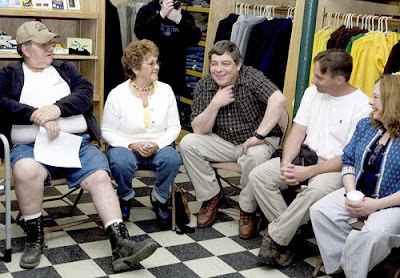 Over 40 people gathered in the store on Thursday, April 30, 2009 for a sharing of Hill's Five and Ten memories. The five people shown above were just some of the area residents who had worked at the store over the years. Pictured left to right are: Robert Nutting, Yvette Tomlinson, Ed Wendell, Vincent Wendell and Theresa Wendell Metayer. Other present or past employees who share thoughts included Mary Wendell, Bertha Loomis, Mariam ODonnell, and Rosezella Souther. Their memories included changes that had been made over the years in the store's merchandise, physical layout and employee policies. (Photo courtesy The Bridge Weekly)